In Paris, the display was watched by thousands of people and followed a concert to celebrate France's national day. Stunning displays were seen around the country including in Marseille, while Nice held its display on Saturday – the first July 14th fireworks display to be held in the city since the deadly terror attack of 2016. The display in Marseille. Photo: AFP


Fireworks explode over the Old Port in Marseille. Photo: AFP 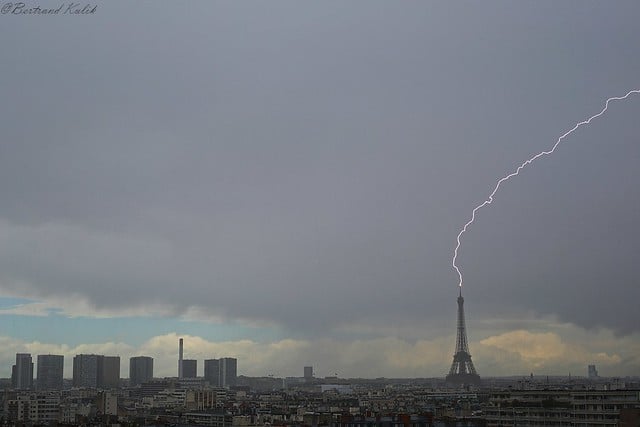 The moment the bolt of lightning hit the iconic Paris monument was captured by photographer Bertrand Kulik (see below).

The Eiffel Tower is the tallest building in Paris and is regularly hit by lightning, with the monument receiving around four to five strikes a year.
This isn't the first time such dramatic scenes have been witnessed in the French capital and elsewhere across France during the month of May.
Last year France's national weather agency Méteo France said that the country experienced the most lightning strikes making contact with the earth since the year 2000.
More storms are set to hit France on Thursday in the Hauts-de-France region in the north while rain will hit much of the rest of the country, according to Meteo France.
Meanwhile on Friday the storms will hit Occitanie right in the south of France as temperatures and conditions start to improve across most of the country.
From Monday next week, the weather will seem more pleasantly springlike, with sunshine predicted across most of France and the mercury set to rise from Wednesday.
French words to know:
Weather – la météo
Eiffel Tower – la Tour Eiffel
Lightning – la foudre
Storm – un orage
SHOW COMMENTS
Url copied to clipboard!