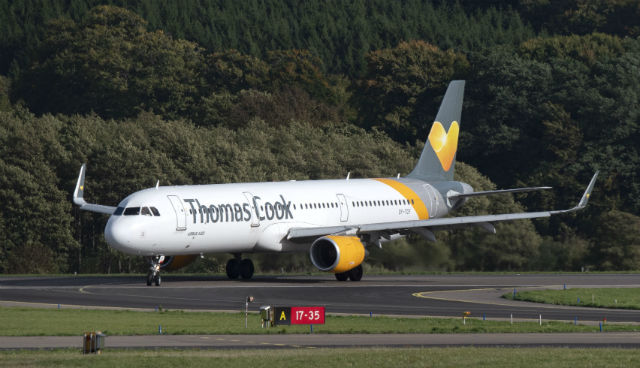 Thomas Cook has had problems with a plane in Palma. Photo: Johan Nilsson/TT
The plane, which had been chartered by Ving, a subsidiary of the UK's Thomas Cook, was supposed to leave Stockholm at 7.30am. By at 4pm on Saturday, it was scheduled to leave at 10pm, more than 14 hours late.
“I don't think they've treated us so well,” Björn Fredin, one of the stranded passengers, told The Local. “The first person we saw was at 3pm. Before that we just got emails and text messages.”
He said he had arrived at the airport at 5.50am to check in. The flight was first pushed forward to 9.30am, and then delayed at two-hour intervals until 3pm.
Passengers were stuck waiting for 15 hours at Arlanda Airport. Photo: Björn Fredin
Fredin said he and family had had the same problem on the way back from an all-inclusive charter holiday to Mallorca last week.
“This is our second time this week,” he complained. “Me, my wife and kids went with Ving and when we were on our way back we had a four-and-a-half hour delay.”
He said that after the family holiday, he and his wife had decided to return to Mallorca as a couple.
“We have no kids this week so we thought we'd take a last chance to go to Mallorca for a sunny weekend, and now were stuck in Arlanda instead.”
Fredrik Henriksson, head of communications for Thomas Cook in Northern Europe,  told the Aftonbladet newspaper said that there had been a technical problem with a plane at the airport in Palma, Mallorca's capital city.
“We expect to find a solution. We of course want to get them on their way as soon as possible,” he said. “It is of course very unfortunate to have this sort of delay but safety comes first.”

RYANAIR
Ryanair to start flying from Arlanda this autumn
Url copied to clipboard!