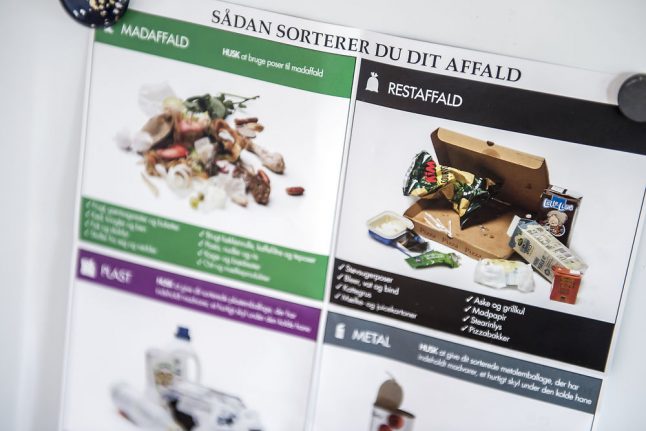 New Minister for the Environment Lea Wermelin says that Denmark can improve its waste management relative to current practices in the country.

“The clear message to all Danes is that we are going to intensify our green ambitions regarding trash,” Wermelin said.

The average household in Denmark produced 600 kilograms of waste in 2016.

Almost half of that rubbish – 48 percent – was sorted for recycling.

But that leaves plenty of room for improvement, according to Wermelin.

“Our record compares poorly to the rest of Europe – we are the ones with the worst waste figures.

“That’s why it’s important that we do something to reduce waste volume and increase recycling. This is an area I plan to focus on,” she said.

One area in which changes can be expected is the sorting of rubbish in different municipalities. Currently, the extent to which different types of waste are sorted and collected varies between municipalities.

An example of this is bio waste, which is collected in specially-provided green bags and bins in Copenhagen Municipality, but other areas do not provide similar facilities.

Textiles, plastic and electronics were named by Wermellin as areas in which recycling can be increased.

“We need more sensible sorting of waste and we need to get Danes behind the project. I think they will be (behind it),” she said.

Mads Jakobsen, a city councillor in the Struer municipality in western Jutland, is also chair of the Dansk Affaldsforening association, which represents waste management companies.

“We are well underway with development of a more unified collection system across municipalities. You just need to be aware there is a difference between living in an apartment, detached housing or a holiday home,” Jakobsen said.

“That’s why individual considerations are necessary in the various municipalities,” he added.

Dansk Affaldsforening is currently in discussion with the food industry regarding potential markings on packaging which will aid correct separation of waste.

“That’s the next step and will make it much easier to sort (waste),” Jakbosen said.

READ ALSO: Denmark's Roskilde Festival creates a city's worth of rubbish. What are organizers and guests doing about it?