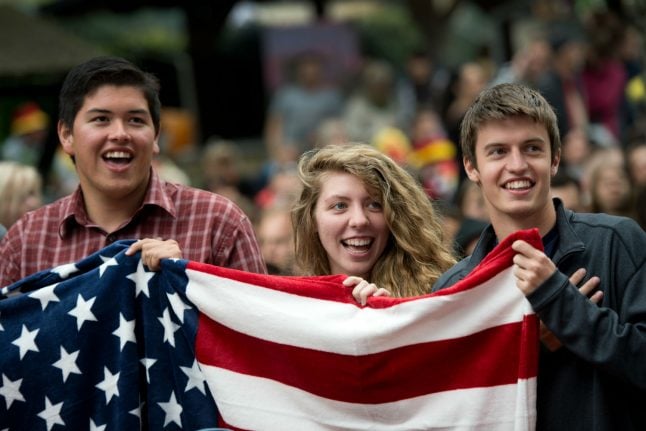 Americans at a World Cup public viewing in Dresden in 2014. Photo: DPA

This article was updated on July 4th, 2019 and is available to Members of The Local. Read more Membership Exclusives here.

There are nearly 120,000 Americans currently living in Germany, according to December 2018 Destatis statistics. Add to that more than 50,000 US military personnel stationed throughout the country and the total number of Yankees in Germany punctures the half a million mark.

It comes as no surprise that Berlin is the city that boasts the largest population of American expats, with 19,825 of ‘em. The wealthy southern state of Bavaria boasts 24,895 Americans, making it the Bundesland with the most Amis. Neighbouring Baden-Württemberg is the third most American-rich state (after Berlin): it counts 17,215 Americans among its population.

Even in German cities where there are few Americans, American culture has made its presence felt.

In March, American fast food chain Kentucky Fried Chicken announced that it would be expanding threefold in Germany within the next five to seven years, bringing the total number of restaurants from 163 to 500.

American burger chains have also hopped on the bandwagon, with Burger King recently announcing plans to expand their number of shops from 700 to 1,000 by 2023. McDonald’s still reigns as Germany’s greasy food giant, with the number of stores totaling over 1,500. Some of the classic American products found in German supermarkets and stores. Photo: DPA

American corporations and their employees

The three largest US companies in Germany are Ford-Werke in Cologne, with 25,399 employees, Opel Automobile in Rüsselsheim (near Frankfurt) with 20,619 employees and Amazon with 12,000 employees. The later just announced that it would be hiring for 2,000 additional positions by the end of this year.

There are 2,200 US companies in Germany – or those which have a base in the States – employing a total of 700,000 people, according to Elizabeth Boshold from the American Chamber of Commerce in Frankfurt. Many of them recruit Americans, who value the higher quality of life they can have in Germany versus back in the states, says Boshold.

“Americans appreciate that they have more vacation time in Germany,” she told The Local. “There tends to be a better work-life balance with four to five weeks, compared to just two weeks in the US.”

Furthermore, “it’s also mandatory that people have health insurance,” she said. “It’s not connected to their jobs as it is in the US, so they feel more at ease.”

Other top attracting factors for Americans who make the move to ‘Schland are good schools and infrastructure, the ability to affordably travel to other European countries, and the fact that English is the lingua franca in many large international offices.

Other big pulls: studying and the military

In the 2016-2017 academic year, more than 10,000 American students were enrolled at German universities, according to data from the Institute for International Education (IIE). That signifies an increase of nine percent compared to the prior academic year and a full 25 percent more than in the 2008-2009 academic year.

Berlin is also the most popular destination for university students, with over 1,000 of them distributed throughout its three universities. The numbers are also high in Baden-Württemberg, which has world class institutions such as the University of Heidelberg. Unlike in the US, where the cost of a bachelor’s degree stretches into the six figures, many US students in German can receive their education almost kostenlos.

Throughout the country’s universities, there are more than 900 courses offered completely in English, with over 1,000 English-language classes added over the past few years, according to IIE.

The US military is another unmissable factor in the statistics.

A large number of Americans live in in the Rhineland-Palatine city of Kaiserslautern and its surrounding area. The Kaiserslautern Military Community, home to around 54,000 people, including military service members, has been the largest American armed forces community outside of the US since the 1950s.

Due to western Germany’s strong military history, the area around Darmstadt has nearly 16,000 Americans living there. Other cities in the southwest of the country also carry large numbers, namely Stuttgart (2,015) and Wiesbaden (1,295). American military bases in Germany, with the red points marking bases that were closed by 2015. Photo: DPA

While Potsdam is a popular day trip for American tourists to Berlin, only 275 of them actually live there, out of a foreign population of 15,050. Yet the number is even less in Cottbus, the city with the second largest university in Brandenburg: 70 out of 12,510 total foreigners.

In Görlitz on the Polish border, a number of American films such as Inglorious Basterds and Around the World in 80 days have been filmed in recent years. Yet “Görliwood” only has 80 Americans out of a foreign population of 11,115 living there.

Other eastern German university cities count Americans among their growing foreign populations. Hyped as “the new Berlin”, Leipzig has 815 Americans out of 51,795 foreigners, whereas Dresden in Saxony has 670 of them out of 42,365 foreigners.

FOR MEMBERS: In which German states and cities do all the Brits live?