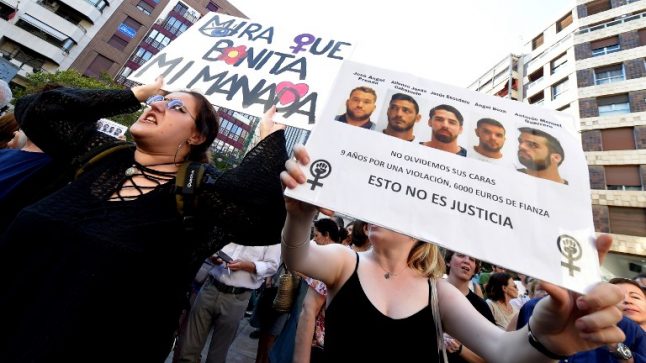 A poster showing mugshots of the "wolf pack" held up during a protest. Photo: AFP

The court sentenced each of the five defendants to 15 years in prison, overturning two previous court rulings in a case that shook Spain, sparking mass protests.

The country's top court examined the crux issue at the heart of the case: was it rape in the eyes of Spanish law, which requires evidence of intimidation or violence?

“The factual account describes a genuine scenario of intimidation in which the victim never consents to the sexual acts performed by the accused,” the court ruled.

The victim found herself in “a situation of intimidation that made her adopt an attitude of submission, doing what the perpetrators told her to do.”

The men were accused of raping the woman, then aged 18, at the entrance to an apartment building in Pamplona on July 7, 2016, at the start of the popular week-long San Fermin bull-running festival.

The five filmed the incident with their smartphones and then bragged about it on WhatsApp where they referred to themselves as “La Manada,” or “The Pack”.

In April 2018, they were each sentenced to nine years in jail for sexual abuse but judges acquitted them of the more serious offence of sexual assault. They ruled there had been no violence or intimidation and that the victim did not resist or fight back.

One of the three judges had argued that the men should be fully acquitted.

That decision — and the subsequent release on bail of the defendants — sparked nationwide protests.

“If you resist they kill you, if you don't resist you consent. What to do?” read one sign at a protest.

Since the verdict, the Spanish government has announced it wants to reform the criminal code to stipulate that a woman must give her explicit consent for sex.

That would be based on a tough new Swedish law that states a person can be accused of committing rape if the other person has not given explicit consent, even if there is no violence or threats.

On Friday, five judges at the Supreme Court, including two women, gave their ruling after examining appeals filed by prosecutors and the men's defence lawyers.

The five defendants, all from the southern city of Seville, had not been called to the stand and the victim has never wanted to appear in public.

Minutes after meeting the drunk young woman, they forced her to perform oral sex, had unprotected sexual relations and left her half naked in the doorway.

One of the offenders stole her mobile.

The footage they shared on WhatsApp was used against them in court but also against the victim for her passivity during the act.

She was described by the court as having “an absent grimace,” keeping “her eyes closed.”

The April 2018 sentence was later upheld on appeal at the high court of the northern Navarra region where Pamplona is located.

It said there had been no proof of violence, and that it was too difficult to discern whether intimidation had taken place given the lack of obvious show of force or threats towards the victim.

But two out of five of the male judges disagreed.

They called the assault “an act of intimidation and coercion created by all of them, laying a trap for the victim given the near zero possibility she had of escaping”.

The two judges said it was rape based also on the “degrading” acts inflicted on the victim.

Saying there was “enough intimidation to neutralise the victim's will,” prosecutors have asked that the defendants be found guilty of rape and sentenced to 18 years in jail, with an extra two years for the one who stole the mobile.

“It's unacceptable to force the law to such extremes by demanding heroic attitudes of victims that inevitably will make them endure greater harm,” they wrote in a court document.

Defence lawyer Agustin Martinez had called for them to be acquitted, having always argued the sexual relations were consensual and denouncing the media glare surrounding the case.