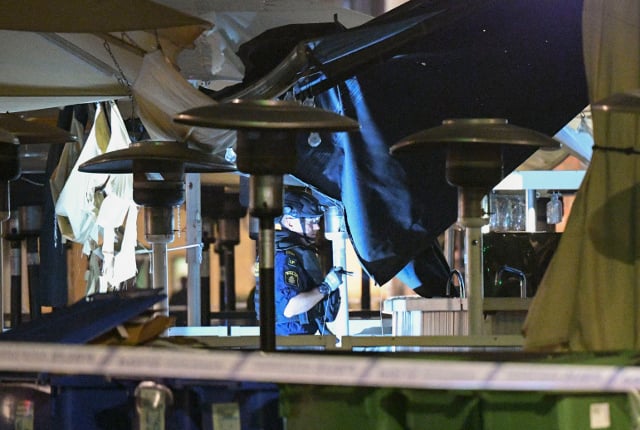 The explosions have even taken place in Lilla Torg in Malmö's historic centre. Photo: Johan Nilsson/TT
1. Even after last week, the explosion rate is down
Even with last week's three blasts in less than 24 hours, the number of explosions remains well below what it was in six months in 2017, when there were in total 58 explosions in the city.
Malmö saw its first spate of blasts in 2015, after which the rate remained high until this year.
According to Nils Norling, a press spokesman for the Malmö police, recent detonations break down into three clusters: a group around November last year, a group this spring, and then a group last week.
For Sweden as a whole, the number of attacks with explosives has increased significantly so far this year, with 93 attacks up until the end of May, compared to 63 in the same period last year.

While the troubled district of Rosengård and its surrounding area still suffers the most, those behind the attacks are increasingly attacking venues in the city centre, with an attack on a café on Dag Hammarskjöld's Square near the Western Harbour district, outside nightclubs on Stortorget, Lilla Torg, and Adelgatan in the city centre, and outside a restaurant in Värnhem.

“There have been three distinctly different trends,” Norling told The Local. “First it was hand grenades, then bangers, then home-made devices.”

From 2015 to 2017, the blasts were primarily caused by hand grenades left over from the civil war in the former Yugoslavia. While the use of military explosives on the city streets may seem alarming, Norling pointed out that the grenades were old and had lost potency.

“We believe it was simply because there were hand grenades available,” he said. “One or several people got their hands on hand grenades and they were used until they ran out or didn't work any more.”


A hand grenade left over from the Balkan War. Photo: Mikael Fritzon/TT

Last year, the blasts were primarily caused by Cobra 8 bangers manufactured by the Italian company Di Blasio. Although illegal in Sweden, they can still be bought online, primarily from Polish suppliers. According to Norling, these have become more difficult for criminal groups to obtain this year. “Swedish customs have got better at finding these bangers when they're sent to Sweden, with dogs and so on, so that's gone down a bit.” Cobra 8 bangers are manufactured by the Italian company Di Blasio. Photo: Di Blasio
Since last November, police believe that the explosions have been caused by commercial plastic explosives. When bangers or hand grenades are used you can usually find fragments on the site. Police have not yet had test results back for every single explosion, but suspect that plastic explosives were used in all, or nearly all, of the blasts.
“Since the winter, we suspect that all the explosions have been caused home-made devices with the active ingredient most likely to be plastic explosive,” Norling said. “But we still haven't received the results of all forensic tests”
“We believe this is most likely being stolen from building sites, both in Sweden and around Europe,” he added. “The detonations we've seen in the last six months are more powerful than what you get from hand grenades or bangers.”
3. Even though seven young men are in custody, little is known publicly about the motive for the attacks
Police arrested two men last week in connection with one of Tuesday's blasts, and there are already five men in pre-trial detention for other attacks. But the motives for the attacks remain unclear.
“We know very little about it, because many of these events are never cleared up by the police and there's very little research on it,” Manne Gerell, senior lecturer in criminology at Malmö University, told The Local. “The police must have some grounds for the arrests so clearly they know something, but it remains to be seen whether they can get anyone convicted for these crimes.”
Norling explained that bomb crimes were particularly difficult to investigate. “It can be a bit troublesome finding evidence on a bomb site. It's the same as with a fire, these detonations have a tendency to destroy the evidence.”
“The things that we look at in these cases are the way these devices are constructed, to see if we can see any similarities. We look to see if it is the same type of plastic explosives as in former explosions and if we can find DNA. We have to make a threat assessment at where the explosion has been, look at the apartment, who might live there, an who might have relatives living in the apartment.”
He said the police believed that the motives behind the attacks varied.  “Extortion could be one motive for the detonations that we've seen,” Norling said. “It could be a show of force, or to scare someone, or to try and destroy a workplace.”
The attacks on nightclubs and restaurants, meanwhile, could simply have happened because a gang member felt badly treated. “It could be that someone feels they got violated because they weren't allowed to come in – they were too drunk, or maybe they were doing something illegal and were told to leave.”
4. The attackers want to scare rather than kill, but don't mind risking the deaths of innocents
The timing of the attacks and the placing of the devices indicate that they are not intended to be lethal. But at the same time, the new home-made devices, where the perpetrator sets a long fuse and then retreats to safety, have no way of preventing hurt to others.
“When they light the fuse, they have absolutely no idea who will be be near the device when it detonates, so it's absolutely ruthless,” Norling said. “It shows a complete disregard for your fellow humans.”
READ ALSO:
5. Police believe the same small pool of people are behind both Malmö's shootings and bomb attacks
“Most likely it's the same core of people doing this,” Norling said. “There are about 200 people of special interest here in Malmö and we look among these people to find possible suspects in these cases.”
He said that these people made a living from drug smuggling and dealing, buying and selling weapons, and extortion. They generally shared a very low threshold for violence.
“The people who commit these types of crimes, are a particularly ruthless kind of person. There are not a lot of people that are capable of detonating these kinds of devices in the places we have seen.”