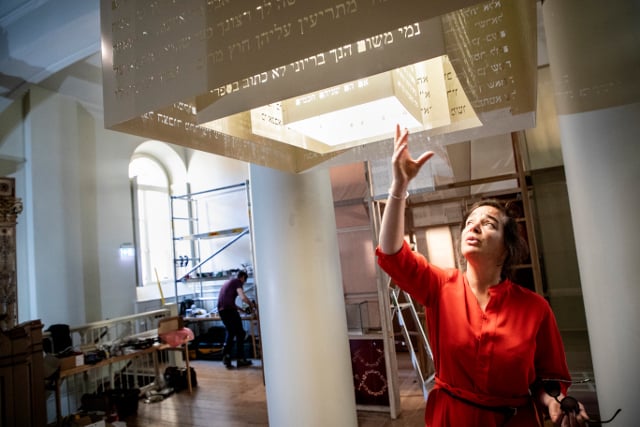 Located in the oldest preserved synagogue in Stockholm, the Jewish Museum reopened in early June with the aim of telling the story of the Jewish people in Sweden.

“The most important message of the museum is that there are many ways of being Swedish, and being Jewish is just one of them,” museum director Christina Gamstorp tells The Local when we visit the Gamla Stan site.

“Also, that this is not a homogeneous society and that there is a lot to learn from the experiences of people that have integrated into society.”

As in most countries of the world, the Jewish population of Sweden has had a tumultuous journey. The museum explains this journey through a series of art instalments, interactive displays and informational panels. The exhibition takes visitors from the Jewish Ordinance of 1782, which marginalized Jews by restricting them to living in only three cities (Stockholm, Norrköping and Gothenburg) and banned them from certain occupations, to the modern day, in which Jewish people have built a vibrant community throughout Sweden.

Within that 250 year period of change and acceptance were the tragic events of World War Two and the Holocaust. Sweden remained politically neutral during the war, a policy which had negative consequences for millions of Jews trying to escape Germany.

READ ALSO: How Stockholm is restoring dignity to the neglected graves of 100 Holocaust victims

One of the most memorable parts of the exhibition, an art installation called No by Åsa Andersson, features a collection of letters written from 1933-1943 from German Jews asking for asylum in Sweden.

In response to such letters, Sweden sent out a standard letter denying entry to all asylum seekers.

Gamstorp reflects on how this policy is one that resonates with many people today given the recent migration crisis.

“I think it relates to the present day with the question of what responsibility can a society take in terms of refugee situations,” she says. “The closing of borders made the Holocaust possible. It's not something that Sweden is very proud of, but it's also the responsibility of the museum to remind us about that part of history.”


This piece by Åsa Andersson is one of the most visually striking pieces in the museum. Photo: Jean Baptiste Béranger

The reinvented museum is the next step in the process of bringing the Jewish story to the world, said Gamstorp. While the first iteration of the museum was mainly about reminding Swedes that there is a strong Jewish community present, after its re-opening there is a focus on tackling larger problems, such as starting discussions about anti-Semitism across the world, including in Sweden.

In Germany, Jews have been warned against wearing kippahs, a customary head covering for Orthodox Jews, and videos have surfaced of Jews being attacked. And in Sweden a demonstration broke out in 2017 against the relocation of the US Embassy to Jerusalem with protesters asserting that they “would shoot the Jews.”

In 2017, an arson attack on a synagogue in Gothenburg and anti-Semitic chants at a demonstration in Malmö led Swedish Prime Minister Stefan Löfven to state that “we have a problem in Swedish society with anti-Semitism”.

Gamstorp says it is more important now than ever to emphasize the shared history of the Jewish people in both the Swedish community and European community at large.

“I think this museum can combat anti-Semitism by spreading information and knowledge by integrating the Jewish community into the Swedish history,” she says. “It can really question this whole xenophobia bullshit. It can't stop it, but it can have an impact.” Collection boxes for Israel, in the homes of many Jewish families after World War Two. Photo: Christine Olsson/TT

Jewish culture is not solely tied to historic tragedies and the fight against anti-Semitism, however.

Padeia, The European Institute for Jewish Studies; Bayit, a Jewish community center in Stockholm; and The Jewish Film Festival are all examples of the thriving Swedish Jewish community that the museum wants to showcase to the world.

The point of the exhibition is that these stories, good and bad, and the problems that Jewish people have faced, do not belong solely to them.

“It's a museum about coming home and finding your place in society,” Gamstorp says. “It's not just a Jewish issue, it's an issue for everyone.”

As a way of driving this home, the museum is running a unique promotion over Midsummer. If visitors to the museum share their own story about 'home', they can enter for free.