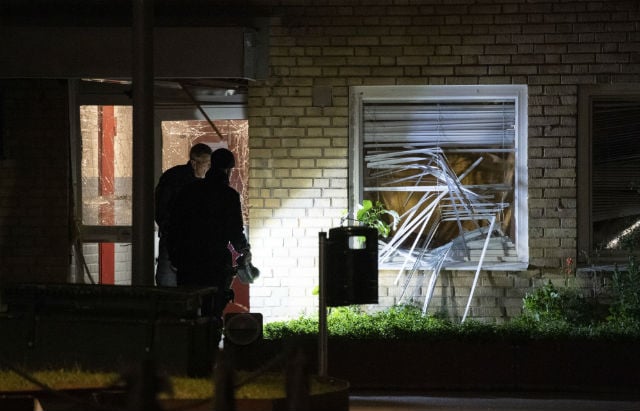 An explosion in Rosengård very early on Wednesday morning damaged a window. Photo: Johan Nilsson/TT
Police received the first reports of the blast in the district of Rosengård at 1.16am.
Nina Janowicz at emergency call centre SOS Alarm told TT newswire that the emergency services had finished their operation, saying it had been calm on the scene, despite the number of people milling around outside the building.
“No one was injured and there was no fire, but police are of course still there,” she said.
The blast came after two explosions on Monday night, one at another stairwell in Rosengård and the other at a nightclub in Adelgatan, opposite the Central Station.
A photographer for the Kvällsposten newspaper said that there was some damage done to a window on the ground floor of the building.
Tommy Bengtsson from the local police told the Aftonbladet newspaper that the blast had been “powerful”, with reports of the explosion coming from across the district.
He told the Sydsvenskan newspaper that it was still unclear if the blasts were connected.
“We will need to assess whether there is some connection as we push forward with the investigation,” he told Sydsvenskan.
On Wednesday morning, Justice Minister Morgan Johansson said that the government would increase the resources available to Malmö's police.
“There are no short cuts. We need to get them behind bars, one by one,” he told Swedish Radio. “There will be more tools available to the police.”
According to the local Sydsvenskan newspaper, two men has been arrested on suspicion of involvement in the explosion at the nightclub on Adelgatan.

Police close to where the suspect's body was found in the water. Photo: Adam Ihse/TT

Named as Mark Lorentzon by Swedish media, the man was suspected of being behind the pre-dawn blast last Tuesday that injured 16 people at the building where he lived.

City workers pulled a body out of a central Gothenburg waterway early Wednesday that “was identified as that of the man sought by police and prosecutors… after the explosion in a building,” prosecutors said in a statement.

They added that suicide was the most plausible cause of death. The man was the subject of an international arrest warrant issued earlier this week.

The suspect, who had been due to be evicted from the building on the day of the explosion, had vanished without a trace.

The blast, which sparked a major fire, landed 16 people in hospital including four with serious injuries, and residents of 140 apartments were evacuated.