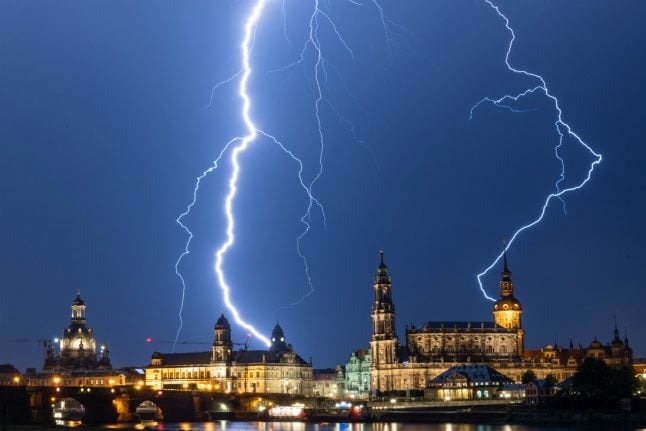 After giant hailstones battered Munich and the surrounding area on Monday, the German Weather Service (DWD) said there is a risk of further thunderstorms, torrential rain, high winds and hail throughout Germany on Tuesday and Wednesday.

Forecasters have warned that the east and southeast of the country are likely to face more extreme weather on Tuesday, while thunderstorms are to spread north in the night.

They added that sweltering temperatures up to 32C are expected in the east of the country. A heat warning has been put in place there.

This German Weather Service report shows where storms are expected, plus it highlights the heat warning in the east.

On Monday night and in the early hours of Tuesday morning, the roar of thunder awakened many people in eastern parts of Germany.

Those who looked out of the window in Berlin and Brandenburg witnessed a natural spectacle: around 50,000 lightning flashes lit the sky in the region, reported broadcaster RBB 24. Lightning in Berlin in the early hours of Tuesday. Photo: DPA

In the whole of 2019, around 130,000 lightning bolts illuminated the skies in this region, indicating the phenomenon of the latest storm.

According to BILD, the figures are calculated on weather data from 155 interconnected measuring stations.

A spokesman for the Berlin fire brigade said, luckily, there was no major storm damage.

In Finsterwalde, Brandenburg, a lightning strike triggered a roof fire, but it was quickly extinguished, a spokeswoman for the Lausitz control centre told RBB24. The heavy rain led to smaller operations after water flooded some basements. The DWD said strong thunderstorms could lash the region on Tuesday evening. This could result in gusts of wind of up to 80 km/h combined with heavy rain. Giant hailstones and wind speeds up to 95 km/h are also possible, said DWD.

The large nationwide differences in temperature remain: temperatures in the southeast and east were expected to be between 25 and 32C on Tuesday, while in the central and northern parts of Germany it should be noticeably cooler at 21 to 25C. In the west and southwest, the mercury is expected to reach just 16 to 20C.

According to forecasters, the risk of thunderstorms will decrease on Thursday.

Storms throughout the south and east

On Monday, the focus of the storm front was on southern Germany and Saxony.

As the Local reported, the hail shower in the Munich area caused injuries, and damaged property when it fell during a storm in the afternoon on Monday.

Several car windows were broken by the hailstones. Meanwhile, houses were submerged in water as torrential rain fell.

Emergency teams were called out on 550 operations in Munich alone, DPA reported.

In the south of Saxony 30 to 50 litres of rain fell per hour, the DWD registered hailstones with a diameter of up to four centimetres. In the Erzgebirgskreis region, the police reported several flooded streets.

It comes after a series of extreme weather incidents in Germany in recent weeks, which included a tornado in western Germany.