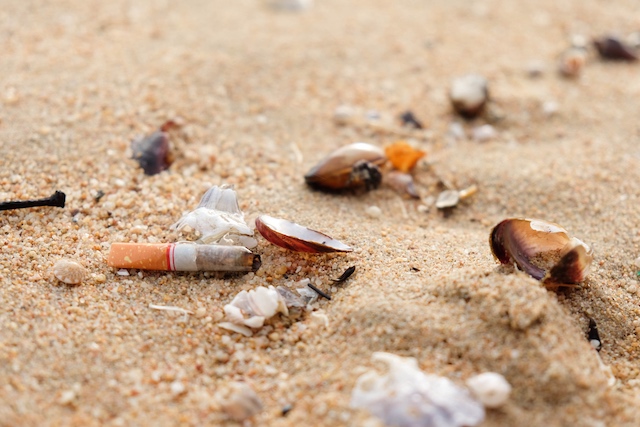 Cigarette butts are the most common litter on beaches around the world. Photo: DepositPhotos

Consumer watchdog Codacons wants local authorities across Italy to introduce legislation forbidding smoking along its 7,800 kilometres of coastline, and warns that it is prepared to take them to court if they don't.

While some communities have already done so, “not enough has yet been done to protect bathers from the health risks of smoking and preserve the environment”, the group said in a press release.

READ ALSO: What is Italy doing about the shocking level of plastic pollution on its coastline?

If local authorities don't act urgently to ban smoking and the dumping of cigarette butts as Italy's famed beaches gear up for their busiest months of the year, Codacons warned it would pursue charges against them of pollution and damage to Italy's natural heritage.

Several towns have already introduced fines for smoking on their beaches, including Bibione on the Venetian coast, one of Italy's most visited seaside resorts, which became the first beach to go smoke-free in 2014. Other towns to follow suit include Savona in Liguria, Sassari in Sardinia, Lampedusa in Sicily, Porto Cesareo in Puglia, and Anzio and Ladispoli on the Lazio coast south of Rome, where beachgoers caught smoking or leaving butts can face fines of between €25 to €100.

While several other communities are debating similar legislation, Codacons says that the piecemeal approach creates confusion and undermines the effectiveness of local bans if smokers can simply walk to a neighbouring beach to light up.

As well as the immediate health risk to smokers and those around them, smoking is also a major source of coastline pollution.

Cigarette butts are consistently the single most common type of litter on the world's beaches, according to conservationists involved in clean-up operations, whether dumped directly on the sand or washed into the ocean from drains and rivers. Most butts contain plastic filters that can take more than a decade to break down, as well as residual chemicals used to treat tobacco.

Authorities should take the issue as seriously as they take plastic pollution, Codacons says, pointing to the examples of Italian beaches that have banned single-use plastic bags and picnicware in recent years.

What do our readers think?

While some expressed concern for personal liberties, most of our readers who voted in our social media polls said you were overwhelmingly in favour of banning smoking on Italian beaches.

Are you in favour of making all Italy's beaches no-smoking?

Read more in our article: https://t.co/YpZ8rPLSv4