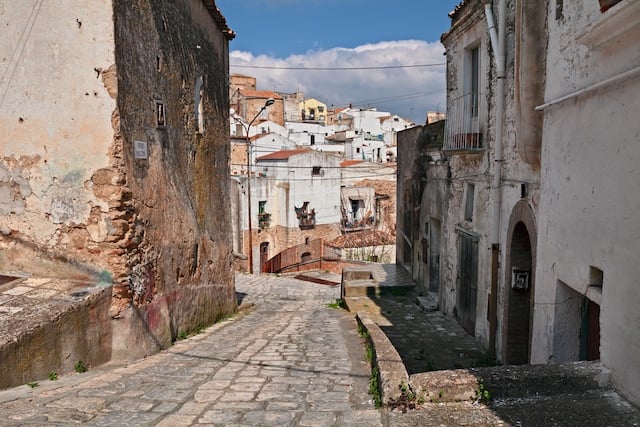 Five lucky visitors arrive on Wednesday in Grottole, a remote village in Basilicata, the southern region that forms the 'instep' of Italy's boot.

They're the group picked for Airbnb's first ever “Italian Sabbatical“, a three-month immersion programme that the accommodation giant hopes will help draw visitors – and their wallets – off Italy's well-trodden tourist trail.

The goal is to give the volunteers a crash course in the local language, food, culture and history, before putting them to work helping residents attract and host paying guests.

The five, chosen from more than 280,000 hopefuls, were selected for the skills they can offer to those new to the hospitality industry: one is a photographer, another a tour guide, another builds websites, and all will teach Grottole residents English.

“They seem like really good people,” one local woman, Enza, who'll be the group's cooking teacher, told Ansa news agency. “I really hope that Grottole is revitalized. The more of us there are, the better we will be.”

Grottole certainly has space for guests. Its residents have fallen to roughly 2,000 and, according to Airbnb, more than 600 homes lie empty.

It's one of thousands of Italian towns and villages, especially in the poorer south, that have seen their population shrink as inhabitants seek job opportunities in bigger cities in Italy or abroad. It's a persistent problem and one for which there aren't any quick fixes. Which doesn't mean that people don't try them: Italy's €1 house schemes regularly make headlines around the world, luring thousands of bidders to overlooked villages with their promise of a bargain.

Some report positive results. “It's been a real economic boost to the area,” one official in Mussomeli, a small town in the centre of Sicily that began selling €1 houses in 2015, recently told Thomson Reuters. An influx of new home owners created work for local constructers and helped put the town on the tourist map, said public works assessor Toti Nigrelli.

But it's not yet clear how sustainable such schemes will prove. After all, how much will a second-homer who visits a few months each summer really contribute to the local community?

Tourism is arguably a longer-term solution, though it depends on developing the infrastructure to meet the flurry of interest stirred up by attention-grabbing initiatives, and careful management to ensure it doesn't end flooding small communities (for a prime example of how not to do it, see the way the villages of the Cinque Terre find themselves overwhelmed). That's where Airbnb says it can come in: not only does it open up the accommodation market to individuals rather than hotels, the company is seeking to promoting “experiences” that offer locals the opportunity to showcase their town's crafts, traditions or other cultural draws. In the case of Grottole, that means honey harvesting, pasta making, olive oil production or vegetable farming.

The company recently offered an “Experience Academy” in the nearby city of Matera to train people in what it calls “a new form of tourism” – slower, smaller, and based on preserving authentic traditions.

READ ALSO: In just 9 months, 500 Florence residents were turfed out to make way for tourist rentals

It makes for good PR for Airbnb, which has faced criticism in Italy as in many countries for hollowing out city centres and leaving residents priced out. But it remains to be seen how much such projects will truly help communities like Grottole.

For now, the town is hopeful. Its mayor, Francesco De Giacomo, told Ansa that the Italian Sabbatical was a “one-of-a-kind opportunity” that had already helped put Grottole on the map.

“Even if I had had 100,000 euros to invest in marketing, I never could have gotten the same results in terms of visibility,” he said.