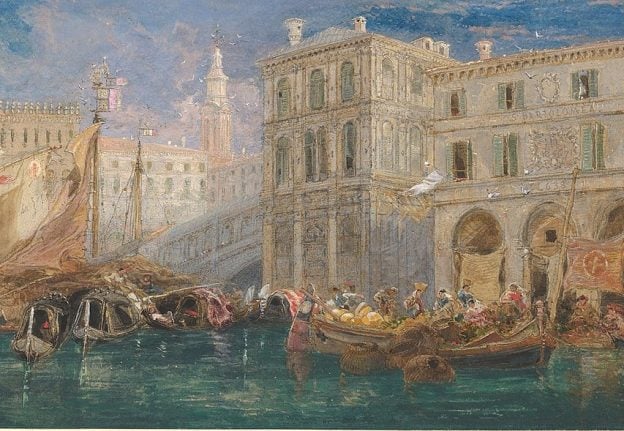 See an Italy from long ago. Image: The Orange Market, Venice by James Holland (1867)

All armchair travellers and lovers of Italy surely enjoy travel writing on Italy – such books extend the pleasure of the actual journey for weeks and months beforehand, and afterwards as well.

But for the lover of travel and history, there are two particular pleasures.

One is reading books by people who travelled many years ago, and whose writings about their experience are therefore descriptions both of the places they visited and the era in which they lived. The second pleasure is reading books by more recent writers who are knowledgeable about history themselves, and who tell you interesting things while sharing the experience of the travel.

READ ALSO: Five must-read novels that will transport you to Italy

So I have quite a few on my shelves. Some, like Dickens, are classics and still easily found; others are out of print and the result of happy discoveries in second-hand bookshops.

Here is a selection.

“One of my first impressions was that the Milanese walk twice as fast as the Romans, and, while walking, can tell a story or pass on a piece of scandal without stopping and blocking the pavement. The sound of the voices was different. The Milanese speak a more measured, less impetuous Italian; and I noticed everywhere a number of fair-haired women. Perhaps a Teutonic strain in the Milanese is responsible for those fair heads; if not, I recalled how noted Milan and Venice were during the Renaissance for hair washes, bleaches and dyes. In one of her letters, Isabella d'Este wrote to her Milanese brother-in-law, Ludovico Sforza, asking how he managed to change the colour of his hair so quickly.” Henry Vollam Morton (1892-1979) was a prolific travel writer who specialised in books about Great Britain and the Holy Land. He did however write three books on Italy – this one, A Traveller in Rome (1957) and A Traveller in Southern Italy (1969).

A Traveller in Italy would have been better titled A Traveller in Northern Italy as it is mainly about Lombardy, Veneto and Emilia-Romagna, with an excursion down to Tuscany and Umbria. Morton is charming and urbane, and wears his learning lightly, telling the story of the career of St Ambrose in the late Roman period in as chatty and engaging a way as he describes meeting an English typewriter salesman in Milan who is astounded by the engineering designs of Leonardo Da Vinci.

READ ALSO: In the footsteps of genius: A travel guide to Leonardo Da Vinci's Italy

He has a gift for the happy phrase – observing the vegetable market in Padua being set up at daybreak, he reflects that it is “obviously joined to the Middle Ages by a continuous string of onions”. Elsewhere he remarks on how appropriate it is that St Anthony is the patron saint both of travellers and of lost property. The waiter at the (then as always) eye-wateringly expensive Florian’s cafe in Venice, serves your coffee “with the air of some grandee doing it for a wager”.

Music, Men, and Manners in France and Italy 1770, the journal of Charles Burney

On Florence: “This city has been longer in possession of music, if the poets and historians may be credited, than any other in Europe… Historians relate that Lorenzo il Magnifico, in Carnival time, used to go out in the evening, followed by a numerous company of persons on horseback, masked, and richly dressed, amounting sometimes to upwards of three hundred; and the same number on foot, with wax tapers burning in their hands. In this manner they marched through the city, till three or four o'clock in the morning, singing songs, ballads, madrigals, catches, or songs of humour upon subjects then in vogue, with musical harmony, in four, eight, twelve, and even fifteen parts, accompanied with various instruments; and these, from being performed in Carnival time, were called Canti Carnascialeschi.” Charles Burney would be known to literary history even without this book. He was part of the intellectual circle of Samuel Johnson, and therefore features in James Boswell’s classic biography of Johnson. He was one of the first scholars in the field of what we would now call musicology, and travelled through France to Italy in order to collect material, especially copies of old musical manuscripts, for a ground-breaking General History of Music. And he was the father of Fanny Burney, who became a celebrated novelist and journal writer herself.

READ ALSO: 23 famous quotes to inspire you to travel to Italy

Burney comes across as a most likeable fellow. He puts up good-naturedly with the discomforts of travel through France to Geneva, Turin, Milan, Venice, Florence, Rome and Naples, and many historic towns in between. He writes not just of music but of art, architecture and the many people – Italian aristocrats and scholars, and English visitors – he encounters.

Travels Through France and Italy, by Tobias Smollett (1766)

“Our young gentlemen who go to Rome will do well to be upon their guard against a set of sharpers, (some of them of our own country,) who deal in pictures and antiques, and very often impose upon the uninformed stranger, by selling him trash, as the productions of the most celebrated artists. The English are more than any other foreigners exposed to this imposition. They are supposed to have more money to throw away; and therefore a greater number of snares are laid for them. This opinion of their superior wealth they take a pride in confirming, by launching out into all manner of unnecessary expence: but, what is still more dangerous, the moment they set foot in Italy, they are seized with the ambition of becoming connoisseurs in painting, musick, statuary, and architecture; and the adventurers of this country do not fail to flatter this weakness for their own advantage.” Smollett, in contrast to Burney, was a real curmudgeon, arguing with every innkeeper on the road and usually ending up damning their eyes for rascally rogues.

But he had wide interests and an eye for detail, ranging from descriptions of the food and local produce of the regions through which he travelled, to their industries and their art.

Pictures from Italy, by Charles Dickens (1846)

On Genoa: “It is a place that ‘grows upon you’ every day. There seems to be always something to find out in it. There are the most extraordinary alleys and by-ways to walk about in. You can lose your way (what a comfort that is, when you are idle!) twenty times a day, if you like; and turn up again, under the most unexpected and surprising difficulties. It abounds in the strangest contrasts; things that are picturesque, ugly, mean, magnificent, delightful, and offensive, break upon the view at every turn.” In 1844 Dickens took time off from writing novels and made an extended trip to Italy, basing himself in Genoa but visiting other principal cities.

A couple of generations younger than Burney and Smollett, and moreover someone who personified the social reform movement of Victorian England, his is a very different lens through which to see Italy, but his writing is as witty and diverting as you would expect, as he describes Italy on the eve of the uprisings of 1848 which ushered in the Risorgimento.

I had never heard of Cecil Roberts (1892-1976) before coming across this book in a second-hand bookshop. It turns out that he was a war correspondent in World War I, and during the Second World War he worked in the British Embassy in Washington. Wikipedia is not kind to him, describing him as a name-dropping old bore, whose many novels are almost entirely and deservedly forgotten. While all that might well be true, this account of a visit to Rome shortly after the war is erudite and quite entertaining. The gossipy nature which seems to have made Roberts a bit trying in person shows itself in some diverting accounts of historical scandals, including that of the pretty young wife of the aged and exiled Bonnie Prince Charlie and her lover, the poet and dramatist Antonio Alfieri.

Perhaps Roberts will be rediscovered one day.

Stewart Skelt is an Australian who, with his wife Louise, spends part of each year in a town in Umbria. His blog, The Patroclus, reflects three of his greatest interests: Italy, history and large and medium format photography.