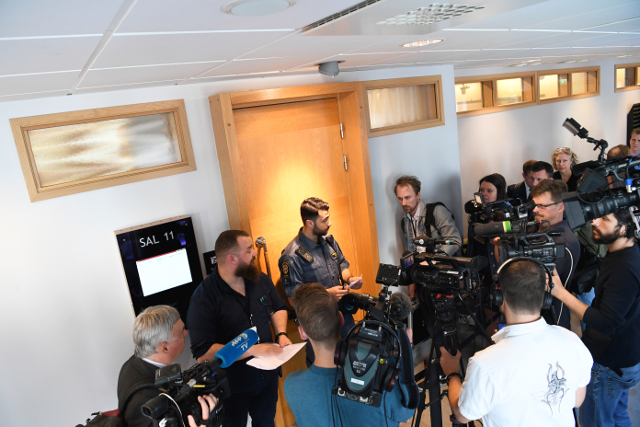 Journalists outside the courtroom on Monday. Photo: Fredrik Sandberg/TT

In a detention hearing earlier on Monday, Swedish deputy director of public prosecutions Eva-Marie Persson told Uppsala District Court that the WikiLeaks founder had not cooperated with the Swedish investigation previously, fleeing from an extradition order, and therefore needed to be detained and questioned in Sweden.

Detention in a person's absence is a standard part of Swedish legal procedure if a suspect is outside the country or cannot be located, and which would be the first step to having him extradited from Britain.

But Assange's Swedish lawyer, Per E Samuelson, meanwhile argued that a detention order was “meaningless” as Assange is currently imprisoned in Britain and should not be considered a flight risk. He said it was not proportionate to ask for someone's detention merely to conduct a questioning session.

Assange remains a suspect, but the court agreed with the defence that it would not be proportionate to formally detain him, because the prosecutor would be able to continue the investigation regardless.

The Australian whistleblower, who holed himself up in the Ecuadorian embassy in London for seven years to avoid a British extradition order to Sweden, was arrested by British police on April 11th after Ecuador gave him up.

He was subsequently sentenced to 50 weeks in prison for breaching bail conditions when he took refuge in the embassy.

Following his arrest Swedish authorities reopened a 2010 rape investigation, which had been closed in 2017 with the argument that as Assange could not be reached it was not possible to proceed with the probe. Assange denies the allegations.

If the Uppsala court had granted the prosecutor's request, she would have issued a European Arrest Warrant to Britain “concerning surrender to Sweden”.

Such a request would, however, have had to compete with an extradition request from the United States, where he is facing a total of 18 charges, most of which relate to obtaining and disseminating classified information over the publishing of military documents and diplomatic cables through the website WikiLeaks.

“I fully respect the court's decision. They had to take a position on a difficult assessment issue, which I considered should be examined by a court,” said the prosecutor, Eva-Marie Persson, in a statement on Monday.
“The investigation continues with interviews in Sweden. I will also issue a European Investigation Order in order to interview Julian Assange. No date has been set yet. We will constantly review the state of the investigation.”