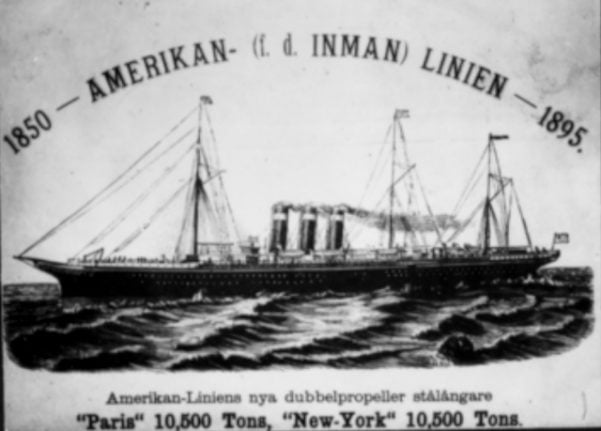 A newspaper advert for one of the ships taking Swedes to America. Photo: TT

In Vilhelm Moberg's 1949 novel The Emigrants, a group of fictional Swedish emigrants board a ship that will take them from Karlshamn in Sweden to New York in the United States of America. The year was 1850, and the period of mass emigration from Sweden had only just begun. Like most pioneers, these early emigrants experienced conditions that would have been considered almost unimaginable just a generation or two later.

“The boys continued their inspection of the brig Charlotta, and were astonished at the small space the passengers had in which to move about. They paced off the length of the ship and her width, and even though they shortened their steps somewhat, they found her length to be no more than forty paces, and her width eight,” wrote Moberg. “Forty paces long and eight wide — for almost a hundred people, for them to live, to sleep and eat and perform all the necessary functions of life. If everyone came on deck at once it would be so crowded they would almost push each other overboard.” Liv Ullmann and Max von Sydow in the movie The Emigrants, based on Vilhelm Moberg's book. Photo: Skånereportage/TT

Below deck, where nearly everyone on board did gather at once, it was even worse. All night and throughout periods of bad weather, the emigrants were crammed together in this small space with little privacy, light or ventilation, and barely enough room to step between living and sleeping areas.

“…in the hold the air was fetid. In their bunks at night seasickness stole over them, as though the illness kept itself hidden somewhere down there and crawled out at night. Then it might happen that there were too few wooden buckets, or that someone couldn't find a bucket in time in the darkness; lights were not allowed after ten in the evening. Then, when daylight began to creep in, it revealed the long night's happenings.”

These figures almost exactly match an actual ship, the Minona, taken by real Swedish emigrant Andrew Peterson, who made his journey across the Atlantic in 1850, along with a similar number of passengers and crew. The narrative therefore offers a bird's eye view of what a typical ship and journey of the period would have been like during the two to three months of these early crossings. Swede Olof Olsson, one of thousands of emigrants, with his family in Rush City, Minnesota, in 1887. Photo: PrB/TT

Almost half a century later, when the advertisement, shown in the top image in this article, for two ships of the American Line appeared in 1895, hundreds of thousands of Swedes had emigrated, most of them to North America, and the transportation of such migrants had evolved significantly.

Launched in the late 1880s, sister ships the S/S City of New York and the S/S City of Paris were among the largest and fastest steamships of their day and the precursors of ships like the RMS Titanic. At more than 500 feet long and 63 feet wide, each had originally been built to accommodate up to 1,740 passengers and 362 officers and crew, though later reconfigurations decreased passenger capacity. Travelling at speeds up to 20 knots, the crossing from Southampton or Liverpool to New York typically took less than a week.

According to the 1896 book, The History of North Atlantic Steam Navigation, the New York and Paris “…were fitted with a luxury and magnificence unequalled at the time.” And while the accommodations of the emigrants, who most often travelled in third class, also known as steerage, were not nearly as comfortable as those in first and second class, they were far superior to those the early emigrants had endured.

The New York and Paris were among the first passenger ships with electric lights throughout and featured new amenities like electric ventilation and hot and cold running water, meaning the emigrants benefitted from at least a few of the modern luxuries on offer.

They also had far more space and privacy than in the past. The History of North Atlantic Steam Navigation exuberantly noted, “The steerage passengers are also well provided for, having no less than 300,000 cubic feet of space.” This implies that these third-class passengers, who numbered as many as 700 to 1,000 on each voyage, not only had more space around them and between themselves and other passengers, but also above them, which would have made their conditions far less claustrophobic than they once were.

Though by 1895 emigration from Sweden had already passed its peak and Swedish emigrants had to travel from Sweden to England by other ships until 1915, passenger records show that Swedes were consistently one of the largest emigrant groups on the New York and Paris.

In another generation, the era of mass emigration from Sweden would come to an end, and the era of the great ocean liners wouldn't be far behind. But in 1895, an advertisement like the ship pictured above represented the convergence of these two important periods of modern history.

Advice for Swedish emigrants to North America, including that those “who fear manual labour should not emigrate” and that you should “not have any exaggerated hopes that you will succeed”. Date unknown, but from the 19th century: