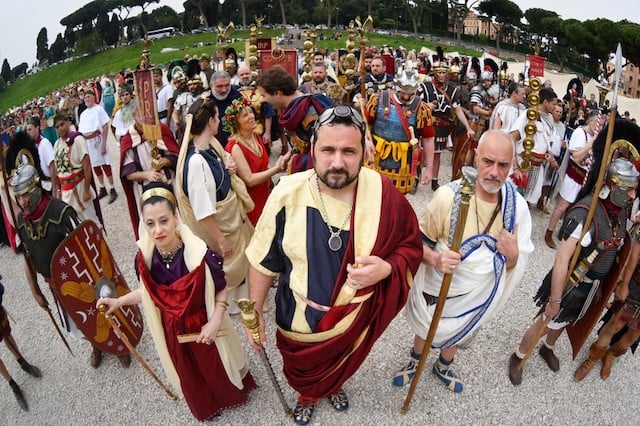 People dress up every April to reenact the legendary founding of Rome. Photo: Alberto Pizzoli/AFP

The series, which is being produced by the same studio responsible for modern-day Italian hits Gomorrah and Suburra, will air on Sky Italia with an international release likely to follow.

It will be directed by Matteo Rovere, an Italian film director who has already told the Romulus story once before in his movie epic The First King, which was also scripted in archaic Latin.

He described the new show as “a story about feelings, war, brotherhood, courage and fear”.

Watch a preview of the shoot here:

The ten-part series will present “a highly realistic reconstruction of the events that led to the foundation of Rome”, Rovere promised in the press release, “but above all, it is an investigation into the origins and the profound meaning of power in the West”.

The world-changing events will be seen through the eyes of three minor characters, including a vestal virgin, who decide not to follow the fates expected of them.

Shooting is due to begin in Lazio – the region around Rome where the original Romulus is supposed to have hailed from – in June. Filming is expected to involve full recreations of two cities, 700 stunt performers and thousands of extras. A sketch of the set design, courtesy of Sky Italia.

According to legend, Romulus and his twin brother Remus were cast out at birth by their great-uncle, who had usurped the rightful king, their grandfather, and was wary of the newborns' claim to the throne. Suckled by a she-wolf and raised by shepherds, they grew up to be natural leaders, helped restore their grandfather to the throne and, upon discovering their true identity, set out to found a city of their own.

After a disagreement over which of the seven hills to settle on and disputed omens from the gods, Romulus murdered his brother (or had someone else do it) and built his city on the Palatine Hill. His name, along with the wolf that nursed him, has represented the city ever since.

The all-Italian series will capitalize on “the most recognizable brand of our country, Rome, which is once again set to attract worldwide attention with a great story to tell – that of the founding of the Eternal City and its myth,” said Nicola Maccanico, Sky Italia's executive vice president of programming.

“Our history, the most proudly local of all.”