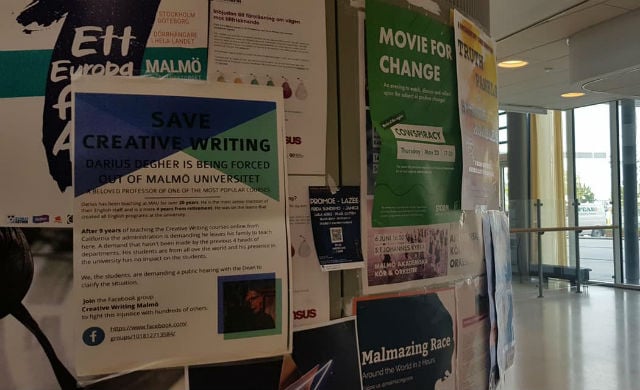 Protesters have put up posters in the Malmö University campus. Photo: Creative Writing Malmö
Darius Deghers founded the course while living in Malmö 1998, and then, after moving to California 11 years later, continued to teach it as a distance learning course under a special deal with the university.
But earlier this year Kerstin Tham, the new vice-chancellor of Malmö University, demanded that Degher from now on spend at least four months in Malmö, ending the deal he had had under three previous deans.
Some 140 current and former students have signed a petition asking for the decision to be reversed, with many submitting letters extolling Degher, and discussing the campaign on the Creative Writing Malmö Facebook page.
Save Creative Writing posters have been put up around the university, and the protesters have managed to get a meeting on Thursday with the university's leadership to air their concerns.
“I have never experienced anything this engaging online. It really took my breath away because it's so excellently put together,” Magdalena Musiala, a former student told The Local. “It's a one of a kind course, it's known beyond Malmö and it matters.”
According to statistics from the Swedish Council for Higher Education, the courses have been among the top three most applied-for courses at the university in each of the last 10 years, with 700 to 1,000 applicants per term from across Europe.
Deghers has said it would be impossible for him to accept the new terms.
“I love Malmö, but that just wouldn't work for me or my family economically or practically,” Degher wrote on the Save Creative Writing Facebook Page.
“It would be so incredibly stupid for me to fly across the world four times a year in order to teach online classes. The ecological problem of it alone is something I could never get beyond.” Darius Degher now lives in California where he works as a poet and singer songwriter. Photo: Darius Degher
“There is an ongoing matter that we can't comment on in detail,” said Rebecka Lettevall, head of the Faculty for Culture and Society, which includes the creative writing course.
She told The Local that since Malmö University became a full university last year, it has become more important than before to have key teachers and lecturers physically present.
“We have become a full university and that puts more requirements on us,” she said. “And for that reason we want to develop the courses and the programmes that we offer, and it's very important that everybody takes part in this.”
“We think that not least the more experienced teachers are important when we want to develop what we offer the students in terms of education.”
Musiala is holding a meeting with Tham and Lettevall on Thursday to discuss the situation.
She said that she thought it was unlikely that another teacher would be able to take over Degher's work without an orderly handover.
“She's willing to risk destroying this course, which is really built on Darius Degher's work. It really depends on him, and she's disrespectfully destroying his life's work, not allowing him the chance to leave it to someone else in a proper manner, just abruptly ending it.”