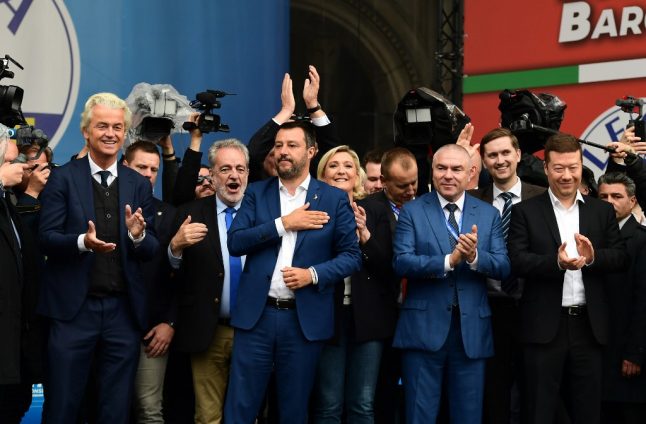 A rally in Milan on May 18 saw leaders of 12 far-right parties gather ahead of European parliamentary elections. Photo: Miguel Medina/AFP

European voters go to the polls to choose a new parliament May 23-26 and gains for eurosceptics and the far right would be a new blow for the bloc's established leaders as the Brexit crisis rumbles on.

In a referendum on June 23, 2016, Britons voted to quit the EU by 52 percent to 48 percent in an outcome that stunned the EU and the wider world.

The divorce process has been fraught and two extensions to the original March 29 deadline mean Britain will still take part in the European Parliament elections.

At the last elections in 2014, the UK Independence Party (UKIP) capitalised on the strong anti-EU mood to score a major victory by taking 24 of Britain's 73 MEP seats. Farage speaks at a European Parliament election campaign rally at Frimley Green, southwest of London, on May 19. Photo: Adrian Dennis/AFP

Marine Le Pen's far-right National Rally party, which has 14 out of 74 French MEPs, has toned down its anti-European message but maintains a tough anti-migrant stance.

Eurosceptic right-wing parties The Patriots, which is pushing to leave the EU, and Debout la France (France Stand Up) have two seats each.

On the far-left, France Insoumise (France Unbowed) — with three Euro-MPs — is against certain EU treaties but not pulling out of the bloc. Le Pen delivers a speech at a rally of European nationalists ahead of European elections on May 18 in Milan. Photo: Miguel Medina/AFP

The anti-migrant and anti-euro Alternative for Germany (AfD) won its first seats in the national parliament in 2017 with nearly 13 percent of votes.

It is Germany's single biggest opposition party but holds only one of the country's 96 MEP seats, losing six after a series of defections. Co-leader of the AfD Joerg Meuthen delivers a speech at a rally of European nationalists on May 18 in Milan. Photo: Miguel Medina/AFP

Italy's ruling coalition of the anti-establishment Five Star Movement (M5S) and anti-immigrant League party won the 2018 national election on an anti-migrant and anti-EU platform but stepped back from demands to exit the eurozone single currency bloc.

The populist government clashed with most of its EU partners when it closed its ports to refugees and has sparred with Brussels over budget numbers and targets.

Of Italy's 73 Euro-MPs, six belong to the League and 11 to the Five Star Movement.

Hardline Interior Minister and League head Matteo Salvini has called on nationalist parties across Europe to join forces and form a new alliance after the election. Salvini delivers a speech holding a rosary during a rally of European nationalists on May 18 in Milan. Photo: Miguel Medina/AFP

After winning more than 10% of the vote in Spain’s general elections in April, the nationalist and anti-immigrant party Vox was recently able to force its way into in the nationally televised pre-election debate tomorrow night, despite not holding any seats in European Parliament at present.
Jorge Buxadé Villalba, the head of Vox’s European parliament list, has argued against more EU integration and called on Spain to suspend its participation in the Schengen agreement until the EU ceases to offer sanctuary to the ex-President of Catalonia, Carles Puigdemont.
While Vox has met with other eurosceptic right-wing parties, they have hesitated to commit to participating in the alliance of nationalist parties called for by Matteo Salvini. Having attacked in vain in the EU's top court quotas meant to share out refugees around the bloc, Orban's populist government faces the threat of European sanctions over the rights of minorities and refugees, and academic and media freedoms.

His Fidesz party — which has 11 out of 21 Hungarian Euro-MPs — was in March suspended from the centre-right European People's Party, the EU's biggest political grouping.

The far-right Freedom Party fell into crisis days before the European Parliament elections when a scandal led to the fall of the coalition government with the conservatives.

Its leader Heinz-Christian Strache resigned as vice chancellor on May 18 after being accused of promising public contracts in return for campaign help from a fake Russian backer before 2017 general elections.

While defending a hardline policy on migration, the party — which has three of Austria's 18 European seats — has abandoned its flirtation with a referendum on whether to leave the EU. Heinz-Christian Strache gives a press conference in Vienna on May 18 after the publication of the “Ibiza – Video” which caused a scandal forcing him to resign. Photo: Alex Halada/AFP
Czech Republic

The premier, who is the Czech Republic's second wealthiest man according to Forbes, faces charges over an EU subsidy scam. He has consistently rejected the accusations against him as a politically inspired plot.

Babis' populist and centrist ANO party holds only two of the republic's 21 European Parliament seats but emerged as the biggest winner in October 2017 national elections and was able to form a minority government.

The anti-migrant Freedom and Direct Democracy (SPD) party, which is looking to bag its first seat in the European parliament, favours a “Czexit” from the EU.

The country faces EU sanctions over what Brussels sees as consistent threats to the independence of its judicial system and civil society.

The far-right Sweden Democrats (SD), with two of 20 Euro-MPs, went into last year's parliamentary elections with the promise of a referendum on a “Swexit”, but have since softened their stance.

SD now wants the EU to work on a new treaty limiting the areas of cooperation to those not infringing core elements of sovereignty, thus excluding defense, foreign policy and immigration. Failing that, Sweden should reconsider membership. Leader of the Sweden Democrats, Jimmie Åkesson speaks during a parliament session on November 14, 2018 in Stockholm. Photo: Jonathan Nackstrand/AFP

The Freedom Party (PVV) of Dutch anti-Islam politician Geert Wilders promotes a “Nexit” from the EU. It has four of 26 Euro-MPs and became the second biggest force in the national parliament in 2017 polls, securing 20 of 150 seats.

The Danish People's Party, with three out of 13 Euro-MPs, is anti-migrant. It favours reform rather than leaving the EU. It backs Denmark's minority centre-right government but does not participate in it. Danish People's Party member Anders Vistisen delivers a speech at a rally of European nationalists  on May 18 in Milan. Photo: Miguel Medina/AFP

The anti-EU, far-right EKRE party has seen a surge in support, becoming the third largest party in national elections in March.

Prime Minister Juri Ratas has drawn the party into a three-party coalition with five ministerial posts. It holds no seats in the current European Parliament.

The eurosceptic party — which has two of 13 Finland's European seats — does not advocate leaving the EU altogether but wants reforms of the bloc.

The Socialist government is in alliance with the Left Bloc, which wants Portugal to leave the eurozone single currency area, and the Communists, who envisage leaving the euro and possibly also the EU. The two eurosceptic parties have four of the country's 21 European seats.

The Social Democratic Party government has had several run-ins with Brussels and has been threatened with “swift” consequences by the European Commission over proposed judicial reforms seen as a threat to the independence
of the courts. The party holds 10 of Romania's 32 European seats.