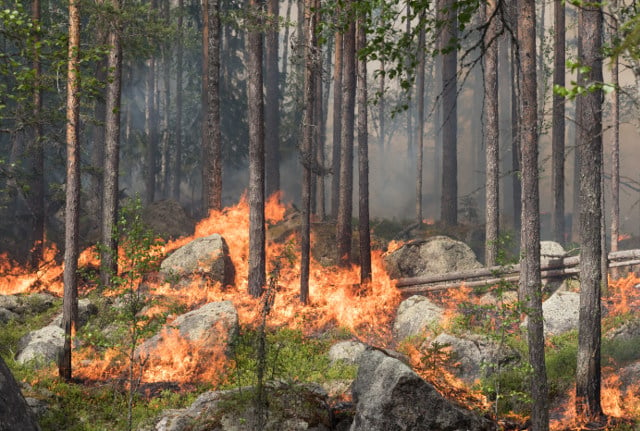 Maria Schultz, the head of Vi-skogen, said that the forest fires had helped raise awareness of climate change. Photo: Erik Nyberg/Sveaskog
According to a survey commissioned by the Swedish aid organization Vi-skogen, no fewer than 85,000 articles were published about climate change in the Swedish media last year, a 38 percent increase on the year before, and more than double the number published in 2014.
“Perhaps it took a summer when forests were aflame and livestock had to be slaughtered for Swedes to understand that the climate crisis is already here,” Maria Schultz, the organisation's head, said in a press release.  “It's a sign of hope, but we are still a long way from where we need to be.”
Remarkably, climate change was the second biggest issue in the Swedish media last year, beating even the football World Cup in Russia, and only just trailing coverage of the general election held in September.
Last summer, Sweden faced the worst forest fires ever recorded, while a drought across the country led to record low harvests and forced farmers to slaughter livestock because there was not enough grass for them to eat.
READ ALSO:
The business newspaper Dagens Industri wrote the most about the climate, publishing 962 articles on the subject, a full third of the total, followed by Upsala Nya Tidning with 324 articles, and Dagens Nyheter with 157 articles.
The most shared article on the climate was an article in the Expressen newspaper on how Sweden's climate minister Isabella Lövin had flown business class to attend meetings and conferences across the world.
“I wish there was no need for a Green Party,” an article Lövin wrote for the left-leaning high-brow newspaper ETC,was the fourth most shared article.
Of the individuals named in climate reporting, teen activist Greta Thunberg was the big new arrival, coming in at number 11 with 2,213 articles.
Sweden's Prime Minister Stefan Löfven came top with 10,699 articles, pushing Lövin, last year's leading climate individual, into second place with 9, 201 articles.