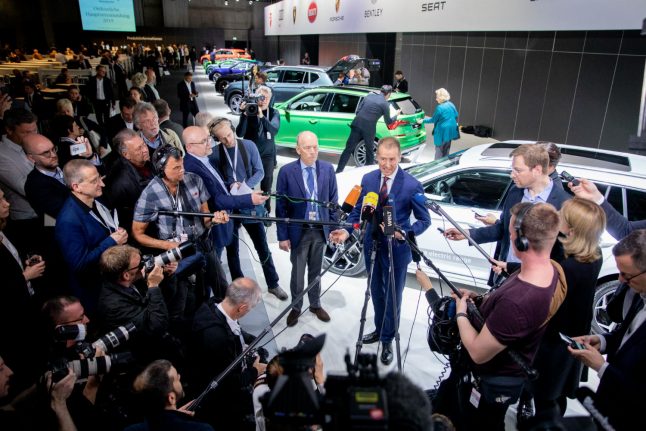 Herbert Diess speaking to press at the AGM on Tuesday. Photo: DPA

“I've come to talk to you about your responsibility for the fact that we are losing our future and our planet,” high school pupil Clara Mayer told the be-suited board members and hundreds of attendees from the rostrum on Tuesday.

“I want you to look your children in the eye and tell them 'I sold your future',”  she added, to boos from some parts of the hall and cheers from others.

Mayer, who is a member of the “Friday for Future” climate demonstrations by school students, had been handed time to speak by investors looking to provoke a faster change of course at the sprawling 12-brand group.

Her speech followed a string of similar actions at the AGMs of firms including chemicals and pharmaceuticals maker Bayer and power company RWE.

Out on the street, around 100 environmentalists staged a “die-in” and chanted “come and see the scene of the crime” as shareholders approached the central Berlin venue.

Inside, Mayer's troop of climate interlopers had to wait almost five hours for their turn at the podium — shadowed at every step by security guards. Like other bosses, VW chief executive Herbert Diess likely hoped that by conceding to some complaints and highlighting existing climate plans he could defuse demands for urgent action.

He acknowledged that with makes ranging from high-end Audi, Porsche and Bentley to mass-market VW, Skoda or Seat, “vehicles belonging to our car brands alone cause one percent of carbon dioxide (CO2) emissions worldwide”.

But Diess recalled that the group is investing more than €30 billion over the coming five years in dozens of new electric models.

Mayer said she was unconvinced by the powerful CEO's message that “climate change has become the main challenge of our time”.

“Volkswagen for me represents capitalism, immorality, greed,” the 18-year-old told AFP. “I want to tell them they are accountable.”

“We don't want cleaner cars. We want this dirty, criminal industry to get out of our society and above all out of our politics,” he told AFP.

That may be easier said that done in Germany, where the car industry employs 800,000 people, accounts for a massive share of exports and donates to parties across the political spectrum.

In VW's case, the connection is even closer, as Lower Saxony state owns 11.8 percent of the group — making good performance for the firm good politics in regional capital Hannover.