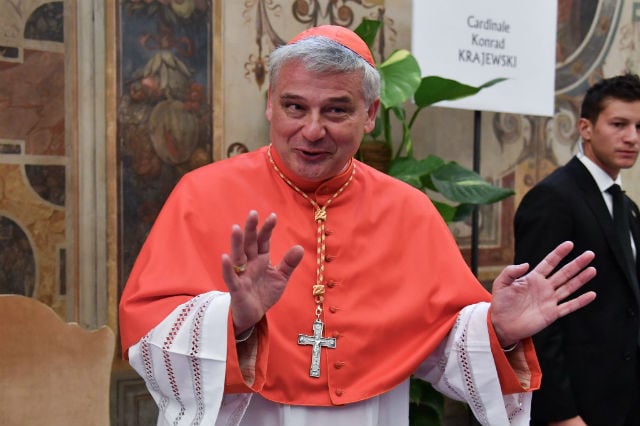 Konrad Krajewski on the day he was made a cardinal in 2018. Photo: Andreas Solaro/AFP
Cardinal Konrad Krajewski broke a police seal to turn the electricity back on Saturday evening in the Rome building, where 450 people including some 100 minors had been living without light or hot water since May 6th, the reports said.
The unpaid electricity bills reportedly amount to €300,000.
READ ALSO: 'Resist': Pope meets Roma family hounded by racist mobs in Rome
“I intervened personally to turn the meter back on. It was a gesture of desperation. There were over 400 people without electricity, families and children,” the head of the Vatican's alms office told ANSA news agency.
The cardinal “was fully aware of the possible legal consequences, and acted in the conviction that it was necessary to do it for the good of those families,” sources close to the alms office told AdnKronos news agency.
Pope Francis has transformed the centuries-old job of Vatican Almoner into a hands-on, door-to-door charitable mission.
Krajewski has just returned from the Greek island of Lesbos, where he travelled to deliver financial donations to projects helping refugees and assure both those living in tent camps and local residents that the pope has not forgotten about them.
READ ALSO: Italy's homeless to get showers at the Vatican