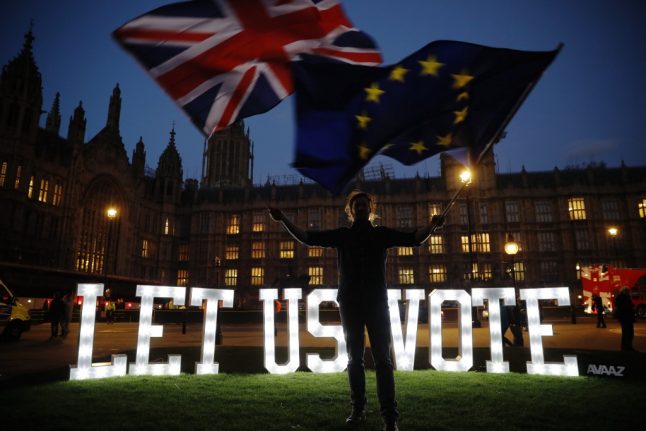 Tusk, the president of the European Council said the chances of Brexit being called off were rising due in the main to the fact that in his view the British public would reject leaving the EU in a second referendum.

The EU's most senior official believes that if Britain voted again today then the outcome of any IN/OUT referendum would be different to that of June 2016.

Tusk believes Remain would win the second vote because British voters had only really realised the impact of Brexit after the first referendum had taken place.

“A real debate about the consequences of Brexit wasn't had during the referendum campaign, but only after the vote. Today the result would probably look different. Paradoxically, Brexit awoke in Great Britain a pro-European movement,” Tusk told Polish newspaper Gazeta Wyborcza, in an interview shared with other European newspapers. “The referendum was at the worst possible moment, it is the result of a wrong political calculation,” he added, in a reference to former PM David Cameron's decision to offer voters a referendum as part of his 2015 election manifesto.

“After the British referendum in 2016, I thought that if we recognise that the case is closed, it will be the end. Today the chance that Brexit will not happen is in my opinion 20 to 30 percent. That's a lot,” he said.

“From month to month, it is becoming increasingly clear that the UK's exit from the EU will look completely different than the Brexit that was promoted. I see no reason to capitulate,” Tusk said.

“Even if we repeat that the referendum is the expression of will by the nation and the will of the nation must be respected, yes, you have to respect it,” he said.

“But the 2016 referendum was not the first on the UK's membership of the EU. The first was in 1975 when the British, two years after entering the EEC, decided to remain in it.

“If the 2016 referendum was able to change the result of the 1975 referendum, why can it not be changed again? Nothing is irreversible until people believe it is.”

Talks between Theresa May and Labour leader Jeremy Corbyn to find a deal that can be put to parliament appear to have stalled.

This week Corbyn, who has been reluctant to back a second referendum, said a re-run of the vote could act as a “healing process”.

As most Britons are now fully aware of, since Brexit came into force, UK nationals who aren’t EU residents can only spend 90 days out of 180 days in Spain and the Schengen Area.

This has proven very problematic for Britons who own a second home in Spain who, when purchasing their Spanish properties, were under the impression they would always be able to split their time freely and flexibly between the UK and Spain without having to become Spanish residents (as long as they respected Spain’s residency and fiscal rules).

It used be an ideal situation for these ‘part-year dwellers’, the best of both worlds some may argue, but the UK’s exit from the EU has complicated things enormously for them.

Estimates based on Spanish government data suggest that in 2020 the number of Britons who owned property in Spain was anywhere between 800,000 and 1 million.

There are now 407,000 UK nationals who are residents in Spain in 2022, and although there is no exact data on the number of Britons who own or rent property long-term in Spain without being residents, it could easily be in the hundreds of thousands.

READ ALSO: Is it true Britons are leaving Spain ‘in droves’ after Brexit as UK tabloids claims?

They are undoubtedly of great economic importance to some parts of Spain, as evidenced by the Valencian government’s announcement last November that they would push the national Tourism Ministry to make it easier for non-resident British nationals to spend more than 90 out of 180 days in the region without having to apply for a visa.

There hasn’t been a public update on this front since, but Spanish law firm Costaluz Lawyers has recently put the issue back on the table, proposing a new type of visa for British second-home owners.

The Local Spain spoke to María Luisa Castro, the lawyer who’s been leading the campaign, to learn more about it.

“We propose a new visa that caters to British property buyers who want to live in Spain but don’t have the necessary funds for the current visa options,” Castro explained.

“We’d like to make it very simple with just two main requirements. Firstly, applicants would have to show that they have owned a property in Spain for at least three years and secondly that they have proof of an income of at least €1,130 a month, roughly half the funds required for the non-lucrative visa”.

Castro also stressed that as part of this potential visa, applicants should have to fulfil conditions for health insurance and have a clean criminal record, a standard practice for most Spanish residence visas.

“But the main condition would be property ownership and sufficient funds,” Castro emphasized.

READ ALSO: What are the pros and cons of Spain’s non-lucrative visa?

The campaign calls on British second homeowners to sign a petition to get the Spanish government to listen to the proposal and meet demands.

Castro believes that there is definitely a need for this type of visa, especially for Britons, who now have to deal with stricter rules and have fewer options since they became non-EU nationals after Brexit.

“There are thousands of British property owners in Spain who bought their properties many years ago as second homes, but also as a place for future retirement or for health reasons,” she said.

Crucially, even though the petition states non-EU citizens, Castro believes that it should really only be made available to Britons.

“It is not simply the fact that they are homeowners that means they should be considered for a new type of visa, but the fact that they had full-time ownership rights in the past, which makes the current restriction a loss of acquired rights”.

In other words, Castro argues that those from other non-EU countries bought properties in Spain knowing that they could only stay 90 days out of every 180, but those from the UK bought them on the basis that they would have greater flexibility in this regard.

“We hope that a visa which requires proof of finances, plus the evidence of being a homeowner with a retirement plan in Spain will be sufficient,” she said.

Another lawyer, Fernando del Canto, from Del Canto Chambers law firm, has previously argued that ownership plus health and retirement associated rights are being infringed upon by the Schengen limitations as per the European Human Rights Convention (EHRC). “A bilateral or reciprocal agreement between the UK and Spain on this particular matter is needed,” he said.

The EHRC states that “every natural or legal person is entitled to the peaceful enjoyment of their possessions. No one shall be deprived of their possessions except in the public interest and subject to the conditions provided for by law and by the general principles of international law”.

Judging by the above, it is open to interpretation as to whether it means that Britons’ rights are being infringed upon or not.

Nonetheless, Castro believes that the 90-day rule has had a huge negative impact on British non-resident homeowners and on Spain itself.

“We are frequently contacted by clients desperate to keep staying here for longer periods, as part of an acquired lifestyle and for health reasons. Now they need to explore the possibilities of the non-lucrative visa, which on many occasions, they cannot afford”.

She believes there is a risk that Britons could stop buying in Spain, “particularly those who bought a property for retirement”, and that many of her British clients have already felt forced to sell their Spanish properties because of Brexit limitations.

READ ALSO: What worries British second home owners in Spain most about Brexit

Britons have historically accounted for the largest group of foreign property buyers in Spain. In 2018, they represented 24.3 percent of the market share. The figure dropped to 20 percent in 2019 and by late 2021 Germans had surpassed Britons as the main foreign buyers in Spain.

This however may have had more to do with Spain’s coronavirus restrictions for non-EU travellers and the UK’s own complex traffic-light system than only as a consequence of Brexit, as in early 2022 UK nationals were back at the top of the property podium again.

So despite the new setbacks, it appears that Spain is still an attractive location for budding British second-home owners, but perhaps more so now for those who can afford the golden visa or non-lucrative visa.

But how likely is it that such legislation will be approved?

Castro firmly believes that the Spanish government will listen to foreign homeowners’ demands. “If we get a good number of signatures and the UK government is also lobbied, it will create awareness. Retired people are an increasing source of economic strength for our country.

“Currently, only those buying properties over €500,000 can apply for residency based on property purchase (through the golden visa). Other EU countries have lower financial thresholds”, she explained.

READ ALSO: What foreigners should be aware of before applying for Spain’s golden visa

Castro encourages second homeowners to do whatever they can to help this visa proposal become a reality, as well as signing the petition.

She advises them to make their voices heard through blog posts, newspaper articles and writing to local politicians.