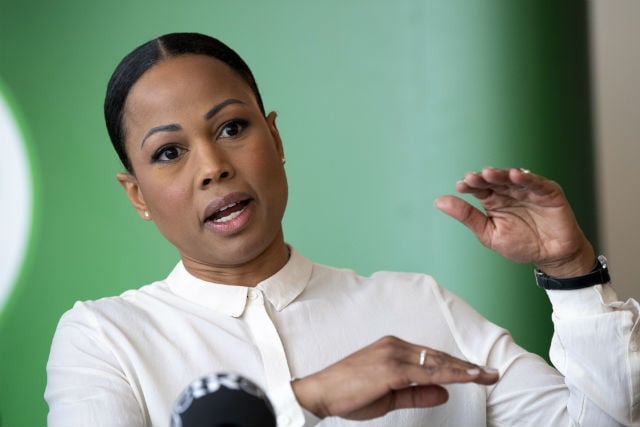 Alice Bah Kuhnke speaking at a press conference on Sunday. Photo: Henrik Montgomery/TT
“We are in the middle of a climate emergency and it is good that so many are now speaking about it,” Alice Bah Kuhnke, the party's top candidate in the coming EU election, said at a press conference announcing a new 'climate package'.
“But pretty words will not solve the climate crisis; that requires strong climate policies.”
The conference saw Per Bolund, who has served as a minister since the party entered government in 2014, voted in as the party's new joint leader, replacing former education secretary Gustav Fridolin, who had held the position for eight years.
But members voted down Emma Nohrén, the MP the party leadership had put forward as party secretary, instead choosing Märta Stenevi, the party's leader in Malmö.
After her election, Stenevi said she wanted to tighten the party's focus on climate politics.
“The party needs to come back to its core. We are greens, we are pragmatic idealists. I'm not away from my children so many evenings for piecemeal reforms and budget proposals. It's because there's a bigger issue, the climate issue, which in some ways is the greatest injustice.”
READ ALSO: Swedish teen’s worldwide strike for climate ‘without precedent’
At the press conference on Sunday, Bah Kuhnke pledged to push Brussels to impose a climate levy on US goods imported to Europe should President Donald Trump succeed in his ambition to withdraw the country from the Paris Agreement next year.
“We believe we are going to need to give Trump some of the same medicine as he's been trying to use to compete against us,” she told the Dagens Nyheter newspaper, adding that she didn't expect the measure to lead to a damaging trade war.
“Trump has clearly demonstrated his irrational behaviour and he is just rattling with his trade weapon,” she said. “We want to make sure that it no longer benefits the USA not to care about our common future.”
The Green Party in Sweden has paid a heavy price for its first period in government, winning just 4.41 percent of the vote in last September's General Election, only just above the four percent threshold required to stay in parliament.
But Bah Kuhnke said that she believed the party's fortunes were now on the up.
“Consciousness is rising just now, we see that not least in the debates in the media. I hope that it doesn't just end up getting stuck with pretty words, but that we, through the January Agreement and in the Swedish parliament, put some real power behind those words.”