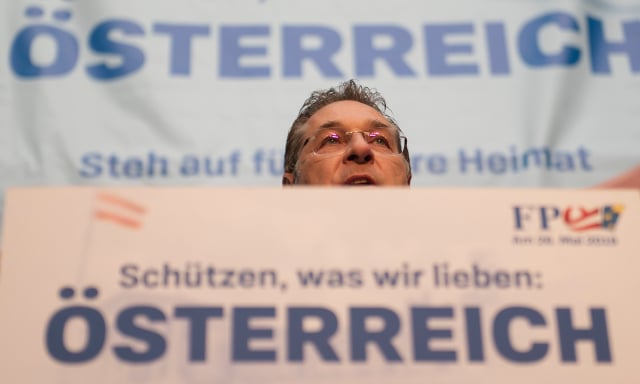 Heinz-Christian Strache, leader of the Freedom Party (FPÖ), said “population replacement” in Austria was “a reality that cannot be denied”, in comments to journalists following a cabinet meeting.

He was responding to criticism of remarks in an interview with the Sunday newspaper Kronen Zeitung, in which he said his party was fighting “population replacement”.

This term is associated with a racist conspiracy theory popular in far-right circles, known as the “great replacement”. It argues that the white, European – and Christian – population is being “replaced” by a population of non-white, Muslim migrants.

On Wednesday, Strache dismissed criticism of the term as “quibbling” designed to stifle discussion of a real problem.

“Population replacement”, he said, was “a concept that we have always used. We have always warned against the mistaken policies of massive immigration”, he added.

Strache occupies the second-highest position in government and his party is part of the ruling coalition with Chancellor Sebastian Kurz's centre-right People's Party (ÖVP).

On Sunday, several Austrian opposition figures denounced what they saw as Strache's reference to this theory, the Liberal NEOS party describing it as “an extremely dangerous signal”.

But Strache insisted on Wednesday that nobody could tell him what language to use.

He was standing next to Chancellor Kurz at the news conference, who a few hours earlier on state television channel ORF had himself expressed his disapproval of the use of the term.

But in the same interview, Kurz defended his coalition with Strache's FPÖ party. “When you have a coalition partner, there are always moments when something doesn't suit you,” he said.

It is not the first time in recent weeks that Kurz has had to distance himself from his coalition partners.

In April, he condemned a poem written by the FPÖ deputy mayor in Hitler's home Braunau, Upper Austria, that compared foreign migrants to rats. Strache intervened and the party announced that the politician responsible would be stepping down.

In March, the FPÖ expelled two of its local councillors after a police investigation revealed that they had shared Hitler photos and quotes on WhatsApp.

And the FPÖ was recently accused of having links to the extremist Europe-wide Identitarian Movement (IBÖ), whose Austrian leader received a donation from the suspect in the New Zealand mosque shootings.

Strache has insisted his party has nothing to do with the movement. But opposition policitians have denounced what they say is a system of thought inside the party, which was founded in the 1950s by former Nazis.