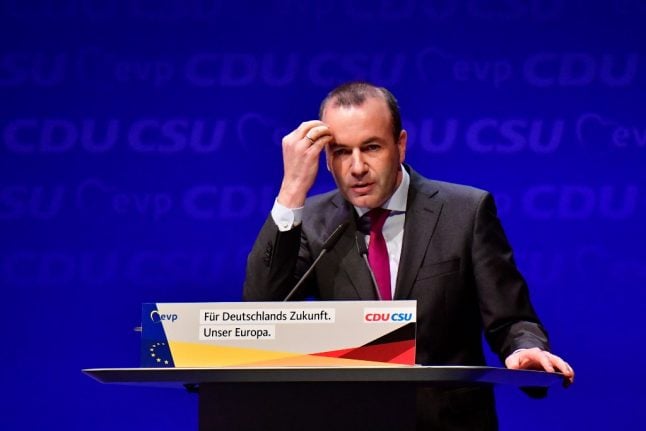 Manfred Weber addresses the launch of the conservatives CDU/CSU European election campaign in Münster on Saturday. Photo: Tobias SCHWARZ / AFP
Manfred Weber is the centre-right European People's Party candidate and frontrunner to replace Jean-Claude Juncker as president of the European Commission.
“We are proud that this continent has a Christian influence… it is not only something for museums, and that should guide us for the future,” Weber said at a political meeting in Münster, western Germany.
These Christian values should ensure Europeans were “frank” in their discussions with Ankara “which is why I believe that Turkey cannot be a member of the EU”, he said, reiterating his opposition to Turkey being allowed to join the EU club. “We want a partnership, a friendship, but we must end accession negotiations with Turkey”.
The European project should be “defended against nationalists and the selfish” he said, adding that Europe faced a “historic turning point” in defence of the European “way of life”.
He said that with the “towers of Notre-Dame burning” in Paris earlier this month, he saw the French cathedral as a significant symbol “for us Europeans to… rely on our shared values and ways of thinking”.
The European Union is to hold elections to its European parliament between May 23 and 26. The vote is expected to see a surge in far-right and populist parties.
Weber, 46, is the leader of the centre-right EPP which is projected to win the biggest number of seats in the parliament, potentially putting him in pole position to take over from Juncker, 64, when he steps down late this year.
Url copied to clipboard!