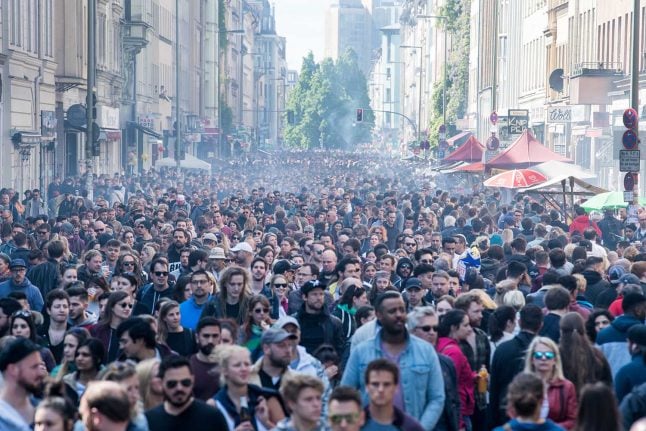 Ask any German older than 30 about May Day in Berlin – particularly someone who doesn’t still live in the Haupstadt – and they’re sure to regale you with tales of burning cars, riots and overzealous police intervention bringing the formerly West Berlin district of Kreuzberg to a standstill.

Their opinion on the day and its significance to the country is likely to turn on their political leanings. But May Day in its current form would be largely unrecognizable to those who remember the chaotic days of the 1980s and 1990s.

Through a combination of gentrification along with changed tactics from the local council and police, violence on May Day has gone the same way as cheap rents and nightclub squats.

Contemporary May Days are cultural celebrations, with police content to play a lower profile to the musicians and artists which entertain the crowds throughout the day and into the evening.

This year however, demonstrators are planning to move the protest march across the river Spree and into the formerly East Berlin neighbourhood of Friedrichshain in a protest against gentrification in the area.

The change in location has led Berliners to wonder if the efforts in pacifying the centuries-old celebrations may have been too successful, thereby leading to dangers of violence on the other side of the river.

READ: Why May 1st is a public holiday in Germany Police on May 1st in Kreuzberg. Image: DPA

A march against gentrification

While May 1st has its origins as a workers' holiday, over time it has come to represent a collection of left-wing causes from supporting refugee rights to staging environmental protests.

With gentrification the hot topic at the moment, protesters plan on marching through Friedrichshain past a number of luxury apartment developments, before continuing down Warschauer Straße in the direction of Kreuzberg.

While protesters are required to seek approval for the march, organizers have declined to do so as they know they will be required to negotiate about planned routes.

Police became aware of the proposed route after the organizers publicized it on Twitter.

Police are particularly concerned that the marchers plan to go through Rigaer Straße, which is currently blocked off due to construction of a new set of luxury apartments from German real estate entrepreneur Christoph Gröner.

Rigaer Straße 94 is the location of a well-known Berlin squat, which has long been a centre of left-wing resistance. In recent years however the district has undergone significant changes, giving rise to an anti-gentrification movement. Police outside a squat in Rigaerstraße. Image: DPA

Fearing that scenes may resemble those of the 1980s and 1990s, the police plan to send hundreds of officers to the blocked off street – although this may only have the impact of inflaming tensions further.

All in all up to 10,000 demonstrators are expected. Given that there has been a form of tacit peace between the two sides established over the past two decades, there are fears that violence between police and protesters may escalate.

In recent years, Kreuzberg’s central Görlitzer Park has become the site of much of the Myfest celebrations.

This year, police have banned celebrations and partying in the park, putting in place measures to attempt to keep order in the area. Spätis (kiosks) will not be permitted to serve alcohol, while DJs and speaker systems will be banned from the area.

However, the Berliner Morgenpost believes any attempt to keep things under control in the defacto May 1st party headquarters will be futile.

May 1st is International Workers Day, which has been an annual celebration of workers and workers rights across the globe for over a century.

Berlin’s May Day has become particularly notorious due to the historical penchant for May Day events to turn violent, especially in the city’s formerly working class Kreuzberg district.

On May 1st, 1987, a workers demonstration turned violent, forcing police to pull out of the SO36 area in the east of the district surrounding Görlitzer Park and Kotbusser Tor.

Cars were burned and businesses were looted throughout the area. Since then, the area has been the site of annual protests, demonstrations and celebrations on May Day each year.

From a police no-go zone to an annual tourist attraction

In the years following the fall of the wall, May 1st clashes became increasingly violent. Clashes between protesters and police were frequent, while large sections of the area were often beset by property damage.

After years of sending higher numbers of police to control the rioting – which often included bringing in armoured riot control squads from across Germany – Berlin authorities realized the policy was fanning the flames rather than keeping order.

The result of higher police numbers led to an increase in members of left-wing organizations, many of whom travelled from across Germany and indeed Europe to be a part of the demonstrations.

This led to the creation of Myfest, the cultural and arts festival which is currently in its 16th year. A free concert on May Day in Berlin. Image: DPA

This gradually changed the atmosphere from one of adversarial relations between protesters and police to one of celebration. Musicians were hired and the police presence was made less obvious.

These days few clashes between protesters and police are seen. The last serious rioting on May Day took place in 2009.