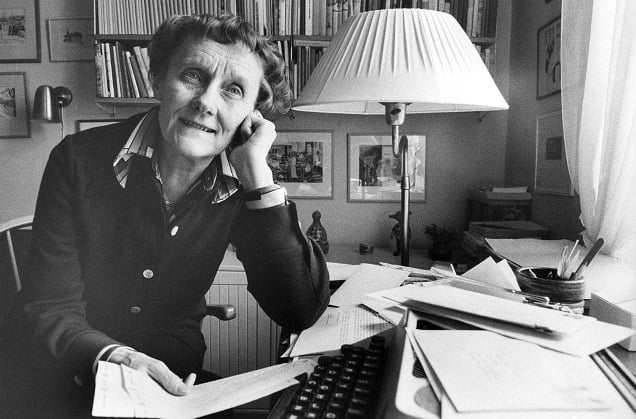 What was your reaction to being asked to translate Lindgren’s war diaries?

I don’t normally ‘pitch’ books to publishers because they like to make their own discoveries, in my experience, but in this case I had actually put some effort into telling the British publisher about this engrossing book and my reaction to it. So of course I was pleased to be asked to translate it.

Do you have a personal relationship with Astrid Lindgren’s books?

I vividly remember first being introduced to Pippi Longstocking when a teacher at my primary school read it to us in the mid-1960s. More recently my fondest memories are of rediscovering her children’s books when reading them to my own children, who I think liked Pippi and Madicken (Mardie in English) best.

I relished translating the three Karlsson on the Roof books for Oxford University Press’s series of new editions; he is a gloriously selfish and annoying character. I enjoyed translating some of Astrid’s campaigning articles, particularly ‘Pomperipossa in the World of Money’ in which she complained that in 1976 the Swedish state was taxing her earnings at over 100 percent.

How did your impression of Astrid Lindgren, as a writer and a person, change through the process of translating her diaries?

My respect for Astrid grew as I came to see what a vast reading and recording task she had carried out, primarily for her own interest, and that she had been able to combine this with going out to work, raising a family and coping with an increasingly roving and alcoholic husband, all in the in relatively difficult (even in a neutral country) wartime era.

I was perpetually impressed by her ability to sustain her no-nonsense tone and her wit throughout, and her energy in maintaining a wide social circle of family and friends. Did you get a sense of Lindgren’s talent for writing and observing developing throughout the war?

Rather than a steady progression in her skills I felt it was more a case of fluctuations arising from pressure of events. When family life was not in one of its crisis periods she perhaps had more time to think, write and process her press cuttings.

Naturally she only knew what the newspapers and radio, and her friends and contacts, could tell her, so it is interesting for us in retrospect to see that her perspective is inevitably incomplete at some points. The slowly emerging truth about the horrors of the concentration camps is one case in point. The sense of despair about the world that sometimes shows through in her diary entries was quite harrowing to deal with.

Which part of the diaries was most challenging to translate?

As ever with translating, small things can absorb a disproportionate amount of time. Some of the domestic detail was a bit tricky: unfamiliar products or dishes or cartoon characters from a different period, for example.

Dealing with the entry for Christmas Day 1945, trying to identify the English originals of the books she bought as presents for her children, was quite a task. Then there were things like Churchill’s speeches: Astrid’s source was the Swedish translations in the newspapers, so was I to back-translate them, or to try to track down the originals online?

READ ALSO: The forgotten Nazi concentration camp survivors in the forests of Småland The diaries were published posthumously. As a translator do you normally have a lot of dialogue with the author, and is there anything you'd have liked to have had the chance to ask Lindgren about the diaries?

The amount of contact I have with the author varies enormously from project to project. In the case of dead authors, their inability to comment brings me both freedom and frustration.

In this instance I was lucky enough already to know Astrid’s daughter Karin, through the OUP Lindgren translation project, and she was very happy to help. She had physically lived the diaries, so to speak, and was an excellent informant. She also understands the working process because she is a translator herself (from English), although now largely retired.

If I had had access to Astrid herself, I would have liked to ask her how she had the stamina for all this, and how much domestic help she had on a daily basis. I would also be intrigued to know whether her elliptical way of describing her marital problems was because she felt too conflicted, wretched and perhaps ashamed to do anything else, or because she thought the diaries might at some future date reach the public domain.

Why were many of the newspaper cuttings omitted from the translation, and what challenges did this pose for you?

This was the British publisher’s decision. All the press cuttings were reproduced in facsimile in the Swedish edition. From my point of view, it complicated matters because I was asked, as part of the translation process, briefly to summarize each press cutting in English, to help the publisher decide which to use.

How did you deal with the task of choosing whether to ‘update’ language or not?

As in other commissions, not only fiction set in past periods, but also non-fiction projects like my recent work on the letters of Tove Jansson (to be published in autumn 2019), I tried to steer a middle course, avoiding obvious anachronism in my choice of vocabulary but aiming not to sound too quaint or archaic. What was your favourite part of the diaries to read?

I liked the domestic detail about shopping, rationing, family health matters, decisions around evacuation of the children, visits to her wider family in other parts of Sweden, and so on. It was fascinating too, of course, to experience the moment in time when she was about to take the leap into becoming a published children’s author.

I was repeatedly struck by her apologetic tone in the diaries as someone in a neutral country not suffering the same privations as those elsewhere. This felt sometimes at odds with her acceptance and enjoyment of the material privileges of middle-class life. I was very intrigued by these tensions, in what – as far as one can tell – was essentially a text intended only for herself.

Sarah Death has worked as a literary translator from Swedish to English for over thirty years and sits on the committee of SELTA (Swedish-English Literary Translators Association). She has an informal role as one of the managing directors and editors of small London-based Scandi-specialist publisher Norvik Press and lives and works in Kent in the south east of England.

Join The Local Sweden's Book Club on Facebook and sign up to our newsletter to receive updates and highlights from the group, and to have your say in what we read next. And feel free to get in touch by email (Members of The Local can log in to comment below) if you have book suggestions, opinions on this month's book, or any other ideas for the Book Club.

“I had never seen anything like this eruption of immense energy,” Bergman writes of his attendance at the rally. “I shouted like everyone else, held out my arm like everyone else, howled like everyone else, and loved it like everyone else.”
In his book, Bergman goes on to write that when he first saw pictures from Nazi concentration camps, he at first could not believe them.
“When all the evidence from the concentration camps actually hit me, my mind could not at first accept what my eyes were registering. Like so many others, I said the pictures were prearranged propaganda lies,” he writes.
“When the truth finally conquered my resistance, I was overcome with despair, and my self contempt, already a severe burden, accelerated beyond the borders of endurance.”
The final quote comes from the memoirs of IKEA founder Ingvar Kamprad, in which he concedes, “I was a Nazi! I admired Hitler!”.
Although Kamprad was an enthusiastic involvement in Sweden’s Nazi youth movement during World War II, he later described this as the “greatest mistake of my life.”
But in an interview for a book by the Swedish journalist Elisabeth Åsbrink, published in 2011, Kamprad refused to disown his youthful support for the Swedish fascist leader Per Engdahl.
“He told me: ‘He (Engdahl) was a great human being and I will maintain that as long as I live’,” Åsbrink told AFP.
As late as 1950, Kamprad sent a wedding invitation to the fascist leader describing how he was proud to belong to the same circle as him.
SHOW COMMENTS
Url copied to clipboard!