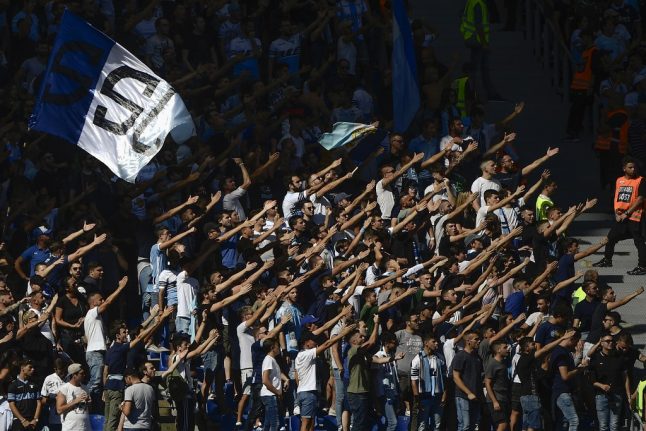 Their faces masked by a long banner reading “Honour to Benito Mussolini”, the group sang fascist songs and performed the Nazi salute near the city's

Piazza Loreto, where the defeated dictator's body was strung up in 1945, the Gazzetta dello Sport newspaper reported.

A short video circulating on social media showed the group holding up the banner, signed 'IRR' in a reference to the Irriducibili — Lazio's hardcore 'ultra' supporters who have a long history of hard-right politics.

Lazio fans on their way to Milan away with banners honouring Benito Mussolini – an ally of Nazi Germany and a friend of Adolf Hitler..

Italian football needs to sort this out.

Lazio's 1-0 win was then overshadowed by the racist abuse of Milan players Tiemoue Bakayoko and Franck Kessie.

“SS Lazio clearly distance ourselves from behaviour and demonstrations that do not in any way correspond to the values of sport that this club has promoted and supported for 119 years,” the club said in a statement.

“Lazio also reject and contest the simplistic tendency of the media to consider the entire Lazio fanbase responsible for the actions of a few isolated elements, for motivation that has nothing to do with passion for sport.

“The club has always fought for the respect of law and fairness in behaviour.”

Lazio fans even after the game are chanting racist chants aimed towards Bakayoko:

“This banana is for you Bakayoko”

They chanted this before the game, during the game and now after the game.

The Serie A clash between Milan and Lazio at the San Siro earlier this month finished with Milan 1-0 winners and scuffles on the pitch after the home players held up the shirt of Lazio player Francesco Acerbi to their own fans like a trophy.

Meanwhile, a video of racist chants directed at Frenchman Bakayoko by a group of Lazio fans before the game also circulated on social media.

Italian football has struggled to prevent racist chanting this season.

Earlier this month, Juventus youngster Moise Kean was racially abused in a game at Cagliari, with his teammate Leonardo Bonucci widely condemned for then saying it was partly the striker's fault.

Italy's national team coach Roberto Mancini was among those to then call on authorities to clamp down on racism.

“No tolerance for any form of violence, physical or verbal. I thank the police who are following the incident carefully. Football must be an occasion of celebration and communion, not for fighting or confrontation,” Salvini, an AC Milan fan, said on Twitter.

In Italy “apology for fascism” is a crime, but some cases have been thrown out in recent years on freedom of speech grounds.