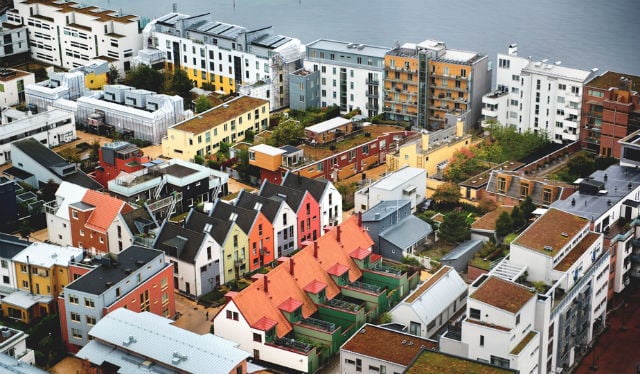 On the aptly named Lugna Gatan (calm street) in Malmö is the headquarters for the city's preschool administration. The windows are adorned with the 17 goals of the 2030 Agenda, among them is Goal 4: Quality Education.

Back in 2015, all countries in the UN agreed on the 17 global goals to lead the world towards a sustainable and fair place by 2030. Malmö was an early adoptee, becoming the first Swedish city to commit to the UN initiative.

But being first in the sustainability stakes is nothing new for Sweden's third largest city.

“We have a long tradition of working with environmental sustainability. As early as 1997 the municipal council decided to work with the UN’s Agenda 21 and later with a focus on social sustainability with the Malmö Commission,” Frida Leander, Office for Sustainable Development at the City of Malmö, told The Local.

The 2030 agenda is comprised of 17 ambitious goals ranging from ending poverty to gender equality and climate change. While the initiative is global in scale, with 193 participating countries, it relies on the collaboration of municipalities at a local level in order for it to succeed.

As a pilot municipality in the process, Malmö is being closely monitored by the Swedish government to see how the 2030 agenda is being implemented. Approximately half of Sweden's 290 municipalities have followed and also commenced work on the UN initiative.

It is quite a responsibility for the southern Swedish city to take onboard but one that Malmö welcomes, says Leander. “Being a front runner among municipalities is a challenge when it comes to taking further steps when there are only a few other cities being at the same level or in the same place of the process of integrating the Global Goals. There are no certain answers or a single solution on how to achieve the 2030 Agenda, rather it is about taking on new approaches and ‘build the bridge as we walk on it’.”

She adds, “But we are not alone in building that bridge, we are in constant dialogue with other municipalities and cities around the world. We learn a lot from others. And as the City of Malmö has been working with sustainability for a long time, especially with environmental and social sustainability, we can share our experiences and our knowledge with the other actors in the work with the 2030 Agenda for sustainable development.”

As one of Europe’s fastest growing cities, Malmö is used to change and enjoys a well-earned reputation for innovation (see the Öresund bridge) and is home to numerous successful startups.

Factoring in sustainability as part of the city’s future narrative is a natural transition says Leander.

“We have developed a strategy where the first and foremost process is to integrate the Global Goals as a part of the ordinary control and management systems, not a strategy that is put to the side of overall visions and goals.”

Goal 12 of the 2030 Agenda is ‘Responsible consumption and production’ and here Malmö is putting itself on the map, quite literally. The web platform Smarta Kartan (Smart Map) launched at the beginning of April 2019 and is an online resource to help locals find solutions to everyday issues, such as getting help fixing your bike.

“So far we have shops where you can drop off and swap items, as well as a bike kitchen, repair café and leisure libraries. The response has been very positive,” Emma Börjesson, project manager for environmental administration with the City of Malmö, tells The Local.

Malmö’s trendy western harbour district is home to the bike kitchen while the repair café enables locals to get support fixing electronic items. The leisure library gives people a chance to borrow items, such as rollerblades and football boots, and further initiatives are planned. Smarta Kartan was first rolled out in Gothenburg, with backing from the city, and other cities across Sweden are keen to follow suit.

“There are a lot of sustainable people in Malmö already and Smarta Kartan is attractive to them. We are also keen to get people involved who aren’t used to being sustainable and engage them too. This project is here to stay,” adds Börjesson. Locals can also volunteer their services too. Smarta Kartan has got backing from the City of Malmö and will remain a part of the city’s environmental strategy going forward and beyond 2030.

This part of Malmö used to be home to the city’s psychiatric hospital and many of the original buildings, which were built in the 1930s, are still in use as daycare centres and schools. New apartments, businesses and public services are being planned for Sege Park merging the old buildings with new builds.

Energy production and energy efficiency will be paramount in Sege Park with the power being supplied by renewable energy in the form of solar panels. The large green park will be preserved and locals will have the opportunity to grow their own crops.

Other green initiatives for Sege Park include resource sharing with car and bicycle pooling services for residents. Food waste will be recycled locally along with self-sufficient street lighting while all buildings will be connected to a smart electricity grid.

Malmö has grand plans to enshrine the 17 goals of Agenda 2030 into the city’s local goals as early as 2020. Activities in the city will be based on sustainable development as part of Malmö’s strategy to implement Agenda 2030 into the everyday control and management systems that keep the city ticking over.

It’s not a simple task, says Leander, but making a difference to our planet isn’t meant to be a piece of cake.

“There are challenges as to how fast we can change ways of working, behaviours and policies in order to make it until 2030. It will not be easy; some may say that it’s not even possible. But what are the alternatives? Not to do anything at all is not an alternative.

“We need to transform the world, and there must be a noticeable change in 2030, in Malmö as well as in the global perspective,” she concludes.