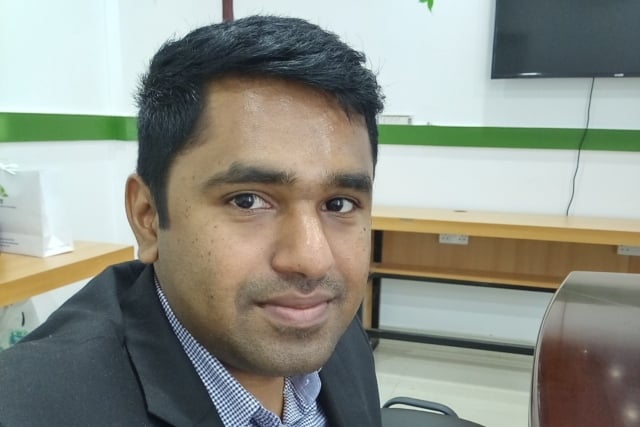 Harish Ravi says networking is the best way to find a job in Switzerland.

Recently, The Local reported on a vote in the Swiss parliament calling for work permit quotas for non-EU graduates of Swiss universities to be scrapped.

The parliament’s vote aims to help Switzerland retain talent and ensure it doesn’t end up educating people without reaping the benefits.

Currently, only around 10–15 percent of graduates from outside the EU (so-called “third-country nationals”) stay on in the country, according to figures from Swiss industry group economiesuisse.

After we published our article, India's Harish Kumar Ravi wrote to The Local to tell us about his experiences trying to find work in Switzerland after completing a PhD in Chemistry and Molecular Sciences at the University of Bern. Here is what he told us:

I moved to Bern, Switzerland at 23 for my PhD. The year was 2009. Prior to that, I lived in Stockholm where I did my Master’s degree.

I still vividly remember taking the train from Zurich to Bern. The sight from my window seat was fabulous. Instantly, I loved the rural landscapes. When I reached the train station in the afternoon it was completely different from what I used to experiencing back in India. It was less chaotic!

Read also: For Indians in Switzerland, the silence can be deafening

The quality of life and the work–life balance, are just a few things that make Switzerland one of the most attractive countries in the world to live in. Just like most foreigners who have been fortunate enough to set foot in this country, it was love at first sight for me.

I found out the best way to integrate in Switzerland was to join some clubs. Since I am naturally inclined to sports, I chose to join the University of Bern Badminton Club. It was probably one of the best decisions of my life. During my time at the club, I made quite a few friends, most of them Swiss.

Not only I was feeling at home, but I was also doing what I loved most: carrying out research and playing badminton.

Everything was going well until 2013. It was my final year of PhD and I would now have to soon transition to Industry to continue staying in Switzerland.

At the end of 2013, I officially registered with the RAV (ORP/URC), Switzerland's unemployment agency. It was really tough for me to handle the new situation I found myself in. The last thing I wanted to happen to me after doing a PhD was to be unemployed. Back home in India, my family and friends were surprised to find out that you can still become unemployed even when you have a PhD.

When I applied for the six-month visa extension to find work, my visa changed from a B (or resident) permit to and L (short-term) permit.

It was very frustrating for me since companies – and especially recruitment consultancies – wanted me to hold a B permit to be considered for vacancies, rather than the L permit that I was now holding.

With my B permit, I got three job interviews but with my L permit this was just one, and that came just before my visa ran out.

In my humble opinion, the L permit is almost useless when it comes to searching for jobs since most recruiters aren't even aware of it, or do not want to take a risk by taking on an L permit holder. They only deal with B or C (permanent resident) permit holders.

After a few more months of unsuccessful job search, I was resigned to the fact that Switzerland was just not for me. With a heavy heart, I left Switzerland in February 2015 when my visa was close to expiring.

As an expat who had lived the previous seven and a half years in Europe, I was now having difficulties to fit into my country of birth. It was a reverse cultural shock for me!

The next two years was probably the hardest phase of my life. I wasn't able to find jobs in my area of expertise – Pharma Research and Development. It was even more depressing since I was no longer in Switzerland and I was not even getting any more interviews.

Thanks to my brother-in-law, I was offered a job in Kuwait for a sub-contracting company servicing the oil and gas industry. I now had to make a decision on whether to change fields and move on from research and development to the oil and gas industry. I decided it was time to transition and I started working as a Health, Safety and Environment (HSE) Engineer from January 2017.

Read also: The best and worst paid jobs in Switzerland in 2019

In the last few years, I have been doing neither of the things that I loved doing – research and badminton.

My hope is that the Swiss parliament’s proposal to scrap the quota system for non-EU students] will now be passed into law. This will, no doubt, dramatically help non-EU students finding jobs in Switzerland.

In addition, try participating in events related to your field and do networking. This is probably the best, if not the only way, to find jobs in Switzerland.

If I can offer just one more piece of advice: while I was registered as unemployed, the RAV recommended that I check check out BNF – the University of Bern's National qualification program. This helps students to connect with companies and NGOs so they can gain work experience and avoid gaps in their CV.

I chose CheckOrphan, an NGO in Basel. There I gained a few months work experience. However, due to a lack of funding/donations, there was no hiring activity going on. In retrospect, I think I should have chosen wisely in terms of where I wanted to be gaining experience after graduation.

If non-EU graduates are going down the BNF route, they should choose a company where there is an active hiring activity. Also, do some research and ask if they have hired non-EU employees before starting.

As for me, it has been more than four years since I left the country. However, I am still in touch with my friends and our friendship is still going strong. I don't know if I will ever be able to once again set foot in Switzerland but I will keep trying, in any case. My friends want me to come back and I want to do it for them.

With my new skills in the HSE field, I hope there will be an opportunity for me in Switzerland in the future and I’m determined to find it.

Read also: How to write the perfect Swiss CV