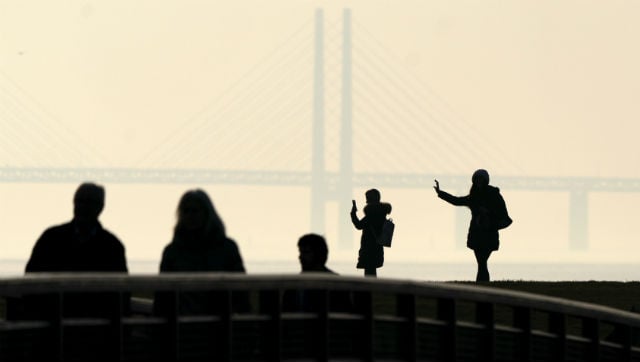 Young families enjoy the spring weather earlier this year. Photo: Johan Nilsson/TT
But while the region's total population exceeds that of Berlin, Paris or Madrid, economic growth still lags behind the most dynamic European regions, according to the Öresund Institute, which prepared the report.
“I think we have good momentum, but we also have a problem, both in Malmö and Copenhagen, which is that the economic growth in both cities is still lagging behind cities like Stockholm, Amsterdam and Hamburg,” Johan Wessman, the Institute's chief executive, told The Local.
The Öresund Region, sometimes marketed as Greater Copenhagen, groups the Danish cities of Copenhagen, Odense and Roskilde together with Malmö, Lund, and Helsingborg in Sweden, and their surrounding regions.
By marketing the area as a single business region, and encouraging cross-border activity, local municipal and regional governments hope to draw investment to the area.
READ ALSO:
According to the figures, which were first released at the end of January, the region's population grew by 0.8 percent in 2018, with Denmark's Christiansø seeing the fastest growth, expanding by 8.4 percent.
Swedish commuter towns of Svedala, Staffanstorp and Lomma grew by 2.4 percent, 2.3 percent and 2.1 percent respectively, and Solrød and Vallensbæk in Denmark by 2.4 and 2.3 percent.
Malmö grew by 1.7 percent, Copenhagen by 1.6 percent, Lund by 1.4 percent, and Helsingborg by 1.5 percent.
Wessman said that the population on the Swedish side of the Öresund Strait had been growing faster in recent years as a result of the 2015 refugee wave, which was continuing to push population growth as refugees settled elsewhere in Sweden move to join family and friends in Malmö.
“We have seen migration from other countries, mostly in the Swedish part of the Öresund region, which has had a rather heavy impact over the last couple of years,” he said.
But he said the region was also growing faster because of its young population and the cities' positive reputation both internationally and locally.
“We have a reputation for interesting cities with good liveability,” he said.  “And when you have a young population, you have more children and higher birth rates.”

Cyclists on Copenhagen's "Lille Langebro" bridge. The Danish capital has admitted to errors in emissions calculations and says it won't be climate neutral in 2025, a long-standing target. Photo by Febiyan on Unsplash

A city councillor told newspaper Jyllands-Posten that the city, which has long stated its aim of becoming the world’s first CO2-neutral capital, would not meet that target as scheduled.

“I won’t need to stand there in 2025 and say ‘hurrah, we’re CO2 neutral’, because I know that CO2 will still be emitted (then),” elected representative Ninna Hedeager Olsen of the Copenhagen Municipality environment section told Jyllands-Posten.

Tourist board Visit Denmark has previously used the emissions goal to market the city, while Prime Minister Mette Frederiksen named the target during the C40 climate summit when it was hosted by Copenhagen in 2019.

But the municipality has included wind energy produced in other municipalities in its calculations on energy sustainability, according to the newspaper report.

The company which supplies energy to the city, Hofor, has erected windmills in a number of municipalities outside of Copenhagen. But the electricity produced by these windmills has been used in calculations of CO2 emissions in both Copenhagen and in the municipalities in which the windmills are actually located.

The replication of the energy production in data for different locations can “rightly” be said to be “cheating the scales”, according to Hedeager Olsen.

But that is not the only problem in calculations of the city’s emissions, she also admitted.

“There are loads of things that haven’t been counted,” she said.

The goal to become climate neutral by 2025 was first set by the city in 2012 in a climate plan adopted by the city government.

Copenhagen was the following year awarded the Cities Climate Leadership award for the plan.