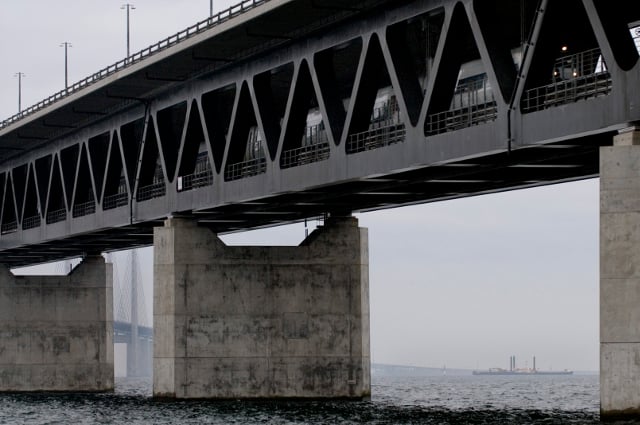 Thousands of people commute daily between Malmö and Copenhagen. Photo: Johan Nilsson/TT
Trains between Copenhagen Airport and Malmö's Hyllie station were stopped in both directions from 4am on Monday morning and were not expected to start rolling again until after 3pm on Monday afternoon.
Titti Unosdotter from the regional transport company Skånetrafiken told the local Sydsvenskan newspaper on Sunday evening that the company had arranged replacement buses between Hyllie and Copenhagen Airport.
At 10am, the Swedish Transport Administration told the TT newswire that it was still unclear when the trains would be back to normal.
READ ALSO: Delays expected at Copenhagen Airport as low-cost airline baggage handlers strike
During the morning rush, commuters reported problems getting places on the replacement buses. “All the bus platforms are full,” complained Catrin Norén on the Broenlive commuter page on Facebook at 8.15am.
“It's hard to get onto the buses when they arrive because of all the people running up and pushing themselves in. There are no people in yellow vests at all here to help.”
But by 11am, commuters were reporting no problems. “Everything's working very smoothly now,” wrote Sofia Nilsson on Broenline. “Information on trains towards Malmö Hyllie exceeds expectations and buses are in place at Hyllie and departing quickly.”
READ ALSO: Why are strikes so rare in Sweden?
Denmark's DJF rail union sent out a press release on Friday afternoon, saying they had lost confidence in Danish rail company DSB. An anonymous group of DSB employees then sent an email to Denmark's Ekstra Bladet newspaper on Sunday saying that a strike was planned for Monday.
Flemming Jensen, DSB's chief executive, accused the strikers of “holding customers hostage with a wildcat strike”.
“The Danish Railway Union has for a long time not been helping to bring peace to our joint negotiations,” he said in a press release. “On the contrary, through their rhetoric and their actions, they have helped to undermine several collective bargaining agreements.”
In a message to his members on Friday, Henrik Horup, the union's leader, blamed DSB. “DSB has chosen to have this conflict and they continue to step it up day by day,” he said.
Trains operated by Swedish company SJ were unaffected by the strike.