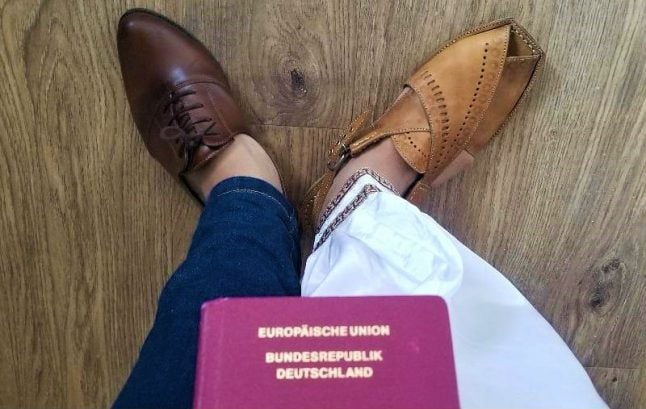 As the Brexit fog thickens, it reduces the visibility of my sense of identity. I have become a disconnected decoration floating upon a mist.

SEE ALSO: 'We must learn from this': The German view on 'Brexit chaos'

Carrying with me nothing, but a folder containing three documents – a creased Pakistani Birth Certificate, a German passport with a faded cover, and an unsettled UK Permanent Residence card. I am a drop in a cascade of thousands of European citizens, all rushing towards the EU settlement scheme.

Despite having lived in the United Kingdom for 20 years, having obtained all my qualifications, employment, and holding a UK driving licence, I must now follow the same procedure as all the European newbies.

Just to digitally clarify my position in these uncertain times? To provide evidence of me being me? Now, an Android technology app will be used to verify whether I'm human? I find it ever so insulting. There's the feeling that you belong to a certain group in a country where your status should already be guaranteed.  I have lived enough years, my residence status should be well understood by all the authorities.

But, I am told that to continue living in the UK, I have two options. I must either apply for the EU Settlement Scheme or for citizenship. That phrase, 'to continue living in the UK,' or otherwise…? Is a phrase so elitist and discriminatory that it begs the question of personal identity. It applies to my survival in the future as well as my existence in the past. What am I? When did I begin?

Born in 1991, in the vibrant city of Lahore, Pakistan, I was just a few months old when my family moved to Dessau in Saxony-Anhalt. The childhood memories of my Germany are so incredibly powerful that I still hold the citizenship dear to my heart. That magical atmosphere of Weihnachten (Christmas), Spielzeug (toy train) shopping at Karstadt, delicious Döner Kebabs and those colourful cartoon pocketbooks.

SEE ALSO: On Brexit and belonging: Reflections of a Scot in Germany

I still remember my first day of school, holding a traditional Schultüte cone filled with candy and gifts. I wore a bright red dress and carried a green, square-framed Donald Duck Schulranzen backpack, which was as big as myself. It was a day full of celebrations.

Yet, looking back, I was the only brown face in the crowd. I remember this girl giving me a hard time; she would steal my lunch and poke me in the eye with a pencil. The photographs of this first day are still neatly positioned in a Spice Girls photo album – the British girl bands was the all time favourite of a 90's childhood when I moved to Birmingham as a seven-year-old. Anam on her first day of school in Dessau. Photo courtesy of Anam Hussain.

As I continued with my educational journey, the differences in borders had gradually faded; I wasn't an alien. By the time I went to university, I was neither German nor British, I regarded myself as a proud citizen of Europe. And then there are the stories my father tells me of his time as a German businessman, the etiquette, structured and ordered, have only further inspired me to strongly hold my citizenship until this day.

The passport had become more than just a few pieces of paper bound together next to my photograph; rather it represented a map of diversity, languages and cultures. The freedom of movement, to live anywhere, without any conditions, forms a central part of my identity. It makes me who I am. The EU Settlement Scheme appears to snatch this identity from me, leaving me deeply unsettled.

The most painful truth is that I wasn't able to vote on my future in the referendum. Instead, those who are probably not even affected directly decided my future which swings between three countries and the word 'exist.' Have I just had a shelf life all that time? A view of Dessau in Saxony-Anhalt. Photo: DPA

Birmingham, you are now, a stranger to me.

As I tip-toe around the city centre streets, I wonder what a no-deal Brexit future could possibly mean to me. The blurred vision seems to be never-ending, I shall take the last walk through the Bullring and past the Chamberlain Square, and as I glide along the Brindleyplace, the Town Hall, half hidden in mist, it will probably be my last glimpse of Birmingham.

Now, more than ever, as a European national, I am making future plans, because it is the only thing I can do with certainty. But, dear Germany, do you still have a place for me, or will I be claiming: Ich bin eine Ausländer? (I am a foreigner.)

In between being European and British, I've also lived in Pakistan. But there too, I'm often described as the 'Bahirwalay' (outsiders). I'm I left with only one option that guarantees me a discrimination free-future – to take the UK citizenship? I'd be forced to spend an insane amount of money, only to prove my life in the UK and take an English language test? Even after educating in Britain? But Germany only allows dual nationality with other EU states and since the UK is leaving, am I also leaving?

The only ray of light powerful enough to pierce through this thick fog comes from within, as I write and photograph the confusing whirlwind.

I will always be a Pakistani, a German, a British, a Brummy. And, a European.