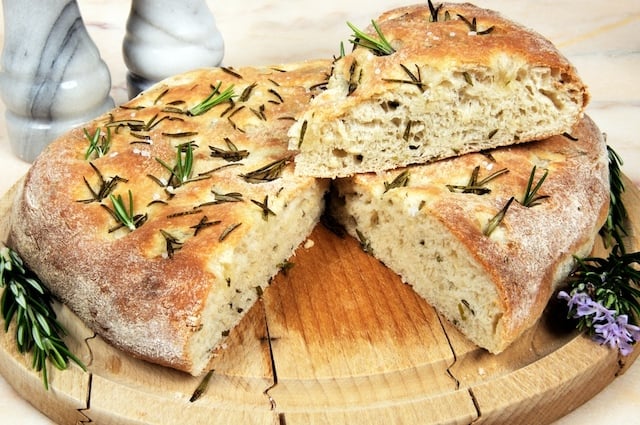 Baking your own focaccia takes patience, but it's worth it. Photo: DepositPhotos

Making your own bread is not hard at all: what’s required is time and patience, but the results are worth the wait.

My father used to spend his Sunday mornings kneading dough, an activity that would both relax him and make our mouths water in anticipation. There is nothing better than a house smelling of freshly baked bread, and to steal a bite of a still warm loaf when no one is looking! This week I propose my recipe for focaccia. I chose to flavour it with rosemary, but other ingredients can be used, according to your preferences: Kalamata olives, onions or sun-dried tomatoes are delicious additions. Or just make it plain: this focaccia is sure to become a family favourite!

1. In a large bowl mix the flour with the yeast and the salt, then add the water and the oil. Mix well until all the water has been absorbed.

2. Take the dough on a flat working surface, and knead vigorously for at least 15 minutes (the longer it’s kneaded, the better the result). The dough has to be elastic and easy to work, but not too soft. If it’s too dry and hard, add a little water (lightly wetting the hands should be enough). If it’s too soft and it sticks to the fingers, sprinkle it with a little flour, and work it until it reaches the right consistency.

3. Coat the dough in a little olive oil, put it back in the bowl, cover it with a clean towel, and let it rest for one hour in a warm place (ideally in a cold oven with its light on).

4. Take the rosemary and hold the sprig from the top. With the other hand, slide the fingers with a decisive downward movement to remove the needles. Chop them roughly and set aside.

5. When the dough has doubled its volume, take it out of the bowl and on a lightly floured flat surface, and punch it down. Add the rosemary and knead for a few minutes until the rosemary has been incorporated evenly. Coat the dough in a little olive oil, put it back in the bowl and cover it. Let it rest for another 30 minutes.

6. Preheat the oven to 200°C/gas mark 6. Carefully oil an oven tray of about 40cm by 20cm. Take the dough and gently spread it to fit the tray. Cover with a clean towel and let it rest for about 10 minutes.

7. Pour the olive oil on the top of the flattened dough and spread it so as to cover it evenly. Pressing with the fingertips, create regular deep dimples all over the surface. Sprinkle some coarse salt on top. Put it in the oven and bake it for 30 minutes or until it has become a nice golden colour.

8. Take it out and let it cool down on a rack before serving. It's delicious served with Parma ham and a glass of Tocai Friulano or Sauvignon Vert. 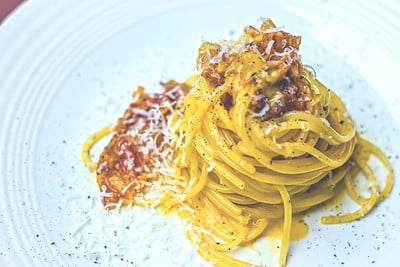 Pasta alla carbonara (literally translated as 'coal workers’ pasta') is one of the most well-known and loved Italian delicacies: the creaminess of the eggs contrasting with the crispy guanciale makes it a pleasure to eat.

The origins of carbonara sauce are still uncertain. However, the recipe doesn’t appear until 1944, which prompts some speculations on how this delicious recipe came to be.

The most widely recognized theory is that this beloved Italian dish is an American adaptation of the traditional cacio e ova: when the Allied troops were stationed in Italy toward the end of World War Two, they got fond of pasta cacio e pepe, but to give them a “back home” flavour, they added smoked bacon to the recipe.

Roman people enthusiastically adopted the new dish, and quickly added it to their cooking.

They swapped the bacon for guanciale (the fat from a pig’s cheek) as they already had pasta recipes using guanciale and Pecorino cheese, the other two being pasta alla gricia and bucatini all’amatriciana.

Don't use Parmesan cheese for this recipe. However, if you're having difficulties finding guanciale, pancetta can be used instead.

Never add cream to the recipe: the creaminess is given by the sheer amount of grated Pecorino – so don't skimp on it!

Step 1:
In a non-stick pan, fry the guanciale in its own fat until slightly crispy, taking care not to brown it too much.

Step 2:
In a large bowl, beat the egg yolks and the whole egg with salt and pepper. Stir in the grated cheese until a thick cream is obtained. Add the cooked guanciale and reserve.

Step 3:
Cook the spaghetti al dente. Reserve about 100 ml of the cooking water. Drain the pasta well, and immediately pour the pasta into the bowl with the eggs. The heat of the pasta will cook the egg.

Step 4:
Add a little bit of the reserved cooking water, and mix well so as to coat all the pasta. If the sauce is still too dense, add some more cooking water. If too runny, stir in more cheese. 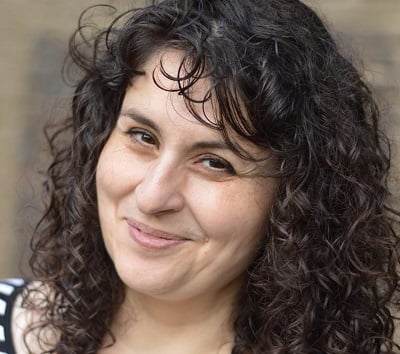