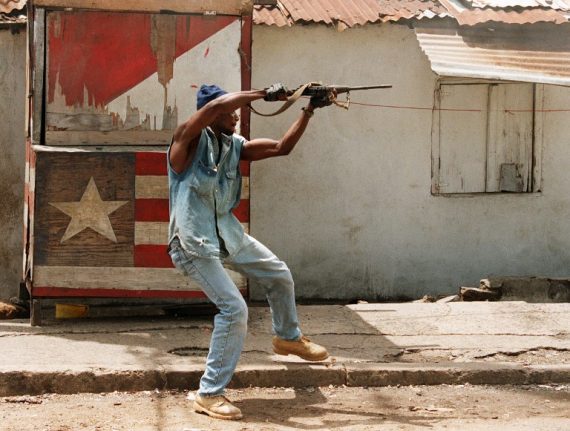 A man shoots at ULIMO-J fighters in Monrovia in May 1996. File photo: AFP

Investigators were also looking at a dozen other cases for “war crimes, genocide and/or crimes against humanity”, said prosecutors.

The Office of the Attorney General (OAG) said it had for the first time presented an “international criminal law-related indictment” to the country's criminal court.

“The suspect is being accused of violations of the laws of war as a member of a military faction in the context of the internal armed conflict that took place in Liberia between 1989 and 1996,” it said in a statement.

He was accused of being a former commander of the United Liberation Movement of Liberia for Democracy (ULIMO), it added, without identifying the suspect.

Liberia, Africa's oldest republic, was devastated by two civil wars that killed around 250,000 people between 1989 and 2003.

ULIMO was set up to fight a rebel force headed by warlord-turned-president Charles Taylor.

Taylor is himself currently serving a 50-year prison sentence for aiding and abetting rebels who committed atrocities in neighbouring Sierra Leone.

The OAG said it had received a number of complaints by Liberian nationals in mid-2014 against the suspect.

They accused the man of committing or ordering murders, a rape and other acts “aimed at enslaving and terrorising the population in the Lofa County between 1993 and 1995”.

Once authorities had determined that the man was in Switzerland and had been living in the country for several years, they opened a war crimes investigation against him.

Although the OAG would not confirm the man's name, elements of the case indicate that he is Alieu Kosiah, a former top Liberian rebel commander suspected of war crimes arrested in Switzerland in early 2015.

It said that the nearly five-year investigation had been made “particularly complex due to the lack of cooperation by Liberia”, and because the alleged crimes had been committed years before.

It finally submitted the indictment on March 22, accusing the man of having either ordered or taken part in the murders of civilians and soldiers not in a combat situation.

The indictment also alleged he had desecrated “a corpse of a civilian, raped a civilian, ordered the cruel treatment of civilians, recruited and employed a child soldier, ordered several pillages and ordered and/or
participated in forced transports of goods and ammunition by civilians”.

Since 2011, it said it had received more than 60 cases involving allegations of war crimes, genocide and crimes against humanity, said the OAG — but most failed to meet the legal requirements, and had had to be abandoned.

A dozen of criminal investigations were still being conducted into “war crimes, genocide and/or crimes against humanity”, it added.