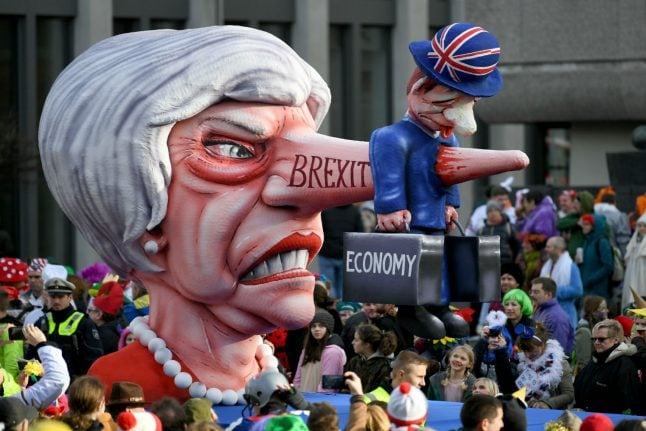 A float depicting UK Prime Minister Theresa May and Brexit at the Düsseldorf Carnival celebrations earlier this month. Photo: DPA

Throughout the whole sorry Brexit saga, politically-minded Germans have had to throw a fair few of their preconceptions about the British out of the window.

Last week’s turbulent European Council in Brussels that found a solution for a delay to the UK’s exit was a further case in point. UK-EU relations have often been tense and complicated, but there was always the recourse to the pragmatism of the British, to fall back to what works.

Yet not for the first time, that was not in evidence at the summit. Once more Theresa May met the leaders of 27 other EU countries and came only with a Plan A – to submit the Withdrawal Agreement to a so-called “Meaningful Vote” once again.

A third time, after it had suffered crushing defeats twice already. Fellow leaders asked the British Prime Minister what she would do if her Deal were to be voted down and her reply was that she was simply following her plan to get her deal through.

Germany’s Minister of State for Europe Michael Roth spoke for many before the summit when he demanded “clear proposals of the UK Government on why an extension [to the negotiation period] is necessary”.

State Minister for Europe @MiRo_SPD calls on the UK to deliver : „Time is running out and we are exhausted by these negotiations. I expect clear proposals of the UK Government on why an extension is necessary. It is a key priority to prevent a No-deal #Brexit.” #GAC pic.twitter.com/b2ZkLLMkuE

But in the absence of any workable proposal from May, it was left to the leaders of the 27 EU Member States, Angela Merkel among them, to propose a pragmatic way forward and save the UK from the No Deal Brexit cliff edge of its own making. After this latest dose of the EU having to save Britain from itself, ZDF’s satirical Heute Show put its finger on a nerve. “Who wants to talk about Brexit again?” Oliver Welke asks in the latest episode. Cue loud groans from the audience. “Brexit is stuck in the mother of all cul de sacs” he goes on. “Even the British themselves have had enough of it!”

No Brexit compromise to be found

If the absence of pragmatism in UK politics is the symptom, then the root cause is harder still for the German satirists, journalists and politicians to understand. Why can the British political parties not find a compromise between themselves to make Brexit work? If the CDU can collaborate with the SPD to form a grand coalition in Berlin, why not work that way to find a solution for Brexit?

The heart of this issue is the very different nature of political parties, and how they are led, how starkly different parties are in the UK in comparison to Germany. The Conservative and Labour Parties have been sworn enemies for decades, and in the House of Commons have not needed to collaborate in modern times. In May and Corbyn, they are each led by people who have each spent more than 40 years in their respective parties.

While Germans may laugh about John Bercow barking “Order, order”, they ought to reflect on why British political culture is so bad that he has to even seek to control the braying masses in the Commons. Such tumult in the Bundestag would, thankfully, never happen.

Trying to solve these party issues – either by replacing May or Corbyn or both of them, or reforming the party system (that is in turn dependent on the archaic electoral system) – are topics for the period once the short term crisis of Brexit has passed.

As if that were not enough, one of the reasons MPs in the House of Commons cannot sort out the mess Theresa May’s Brexit has created is rooted in one of the other traditions of UK politics – the constituency connection. Yes, Members of the Bundestag have their Wahlkreise, but there are lists too. In the UK there are only the constituencies.

Brexit was a 'protest vote'

Brexit has been tying pro-EU Labour MPs in northern English constituencies in knots. Old industrial towns like Wigan, Doncaster or Stoke on Trent – where barely a German tourist has ever set foot – voted to leave the EU, but return Labour MPs to Westminster, and those same Labour MPs are largely pro-Remain.

“But Brexit will hit the economies of these places hard!” say German commentators with a perplexed look on their faces. Indeed. But voters are not rational – Brexit was a way that some of these left-behind places could kick the system, in the same way as voting for the Alternative for Germany (AfD) was largely a protest vote. German Chancellor Angela Merkel speaks to the Bundestag, which tends to be calmer than Westminster. Image: DPA

Meanwhile on the Conservative side, the party’s members are even more heavily pro-Brexit than the party’s voters. Tory pragmatists like Nick Boles are not scared of their voters, but worried by the europhobic attitudes of members that would then not be ready to reselect them to be the party’s candidate for their constituency at the next election.

So then the UK’s lack of pragmatism in the Brexit negotiations is rooted in its dysfunctional parties, and that in turn is amplified by the narrow, local focus on constituencies imposed by the election system. It would all be quaint and traditional for German onlookers, had Brexit not amplified it into a crisis for the UK itself and a mighty headache for the EU.

Jon Worth is a Berlin-based political analyst, consultant and blogger. His Euroblog has been covering UK-EU relations for more than a decade. He teaches EU Negotiations at the College of Europe in Bruges.