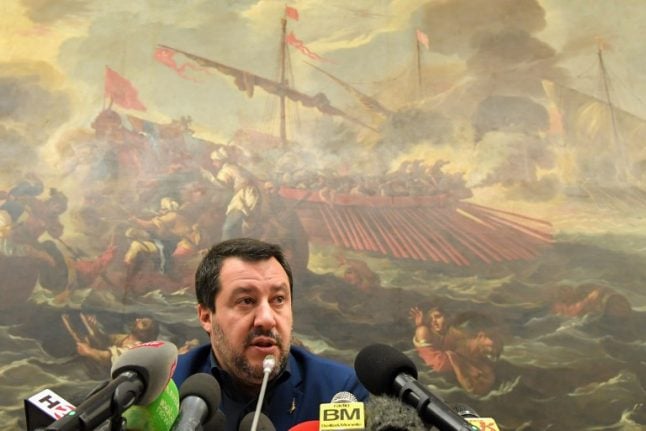 Senators voted 237 to 61 in favour of the immunity commission's recommendation that Salvini, who heads the anti-immigrant League party, should not face trial.

The case relates to the rescue in August of 190 people by Italy's Diciotti coast guard ship, who were left stuck at sea for five days without permission to dock. Thirteen migrants with health problems were eventually disembarked on Lampedusa island off Italy's southern tip.

The ship then headed to Catania in Sicily, but was blocked for another five days before the remaining 177 migrants were allowed off. The permission came only once the interior minister had been assured that other European countries would take them in. A Catania prosecutor opened an investigation into the case but in November decided not to press charges. However, a ministers' tribunal, made up of three judges chosen at random, asked the Senate for permission to go ahead with a trial.

Italy's constitution says that parliament can block proceedings if lawmakers agree the minister was doing their job in the interests of the State.

The League's coalition partner, the anti-establishment Five Star Movement (M5S), voted last month against Salvini being put on trial for abuse of power and illegal confinement. Nearly 60 percent of M5S members voted online that Salvini should not be stripped of his immunity from prosecution.

M5S prides itself on its honesty and has long railed against lawmakers who use their parliamentary privilege to avoid trials.

In a bid to stave off a political tsunami, both Prime Minister Giuseppe Conte, an M5S sympathiser, and the movement's leader Luigi Di Maio have said Salvini was acting with their full support and they would stand trial alongside him if necessary.

Nevertheless, several M5S senators on Wednesday refused to follow the party line and voted for Salvini to face trial.

Salvini, whose League party has soared ahead of the M5S in popularity since last March's election, said his hard line against migrants had saved thousands of lives by deterring people from leaving North Africa for Europe.

He said that one migrant had died at sea in 2019. The International Organisation for Migration says that 152 migrants are missing or dead in the central Mediterranean so far this year.

“I thank God and Italians for the honour of being able to defend my country and my children,” Salvini told the Senate to cheers and jeers. A group of 41 people brought to shore by the Diciotti have filed a separate civil suit claiming tens of thousands of euros in damages from both Salvini and Conte.

In the latest chapter in Salvini's battle against aid groups rescuing migrants, the authorities on Tuesday seized the Mare Jonio vessel which landed in Lampedusa with 49 migrants on board after they were rescued off the Libyan coast.

“We don't have any immunity but we're sure we were within the law and are happy to have brought 49 people to safety,” the Mediterranea aid group collective which chartered the boat said on Wednesday.