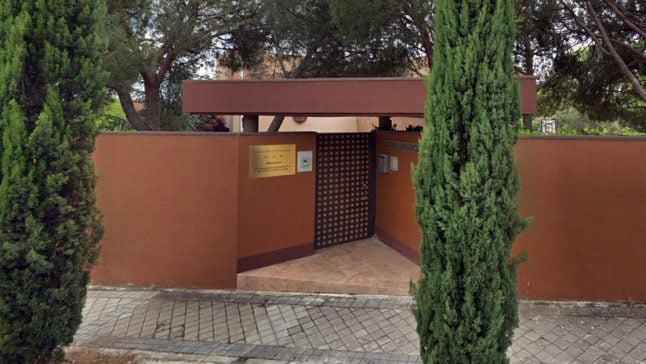 A view of the exterior of the North Korean Embassy. Photo: Google View
Ten men burst into the diplomatic mission on February 22, roughing up employees before making off with documents and computers in two embassy vehicles they later abandoned, just days before a high-stakes nuclear summit between North Korean leader Kim and US President Donald Trump that ultimately failed to reach an accord.
Speculation over the identity and motive of the assailants has swirled in the Spanish media, with a report in the El Pais daily this week citing the country's intelligence agency as saying at least two of them were linked to the CIA.
The Post however reported Friday that the operation was carried out by a group called the “Cheollima Civil Defense” (CCD), a secretive organization committed to overthrowing the Kim dynasty.
Quoting people it said were familiar with the planning and execution of the mission, the newspaper said the group did not act in coordination with any governments, and that US agencies would have been particularly reluctant to be involved given the sensitive timing.
READ ALSO:
The intelligence obtained “could have contacts and documents related to North Korea's efforts to bypass sanctions and import luxury goods from Europe,” Sung-Yoon Lee, a North Korea expert at Tufts University, told the paper.
The CCD organization first emerged in 2017 when it posted an online video of Kim Jong Un's nephew, saying it had guaranteed his safety after his father, Kim's half-brother, was killed after being smeared with nerve agent in Kuala Lumpur airport in February that year.
Last month the group declared itself as a government-in-exile for the North called “Free Joseon.” Joseon is an old name for Korea.
The Washington Post's report is the latest twist in coverage surrounding the murky raid, which was initially reported as a break-in.
The only element that the government and police have officially confirmed was that on February 22 a North Korean
woman who was slightly injured was picked up on a street near the embassy. She is believed to have been the person who alerted authorities.
According to the El Pais report, Spain has asked for clarification from the CIA but the US spy agency denied any involvement.
Spanish authorities however said the response was “not very convincing,” adding that the CIA acted “in probable
cooperation” with South Korean intelligence services.
The embassy has been without an ambassador since 2017 when Kim Hyok Chol, who is now Pyongyang's special
representative for the US and helped in preparations for the summit, was expelled as a “persona non grata” after nuclear tests and missile firings by Pyongyang. The mission has not offered any comment on the incident.
Though the February 27-28 summit in Hanoi failed to reach an agreement, both sides say they are keeping the door of diplomacy open.
Url copied to clipboard!