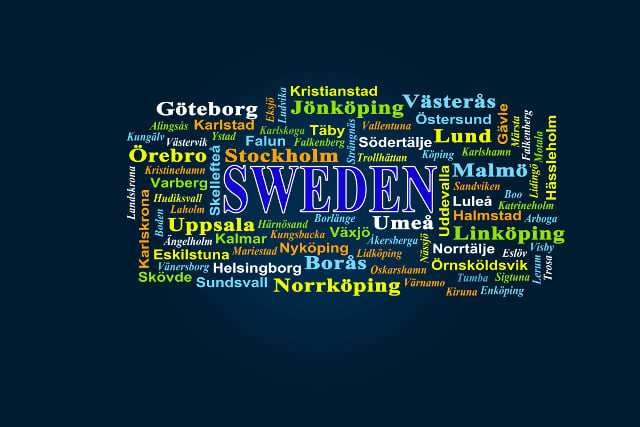 As you travel around Sweden, you'll notice different trends in the place names you see. The north of the country is home to many coastal towns ending in 'å', as well as names clearly Sami or Finnish in origin with vowel combinations and double 'k's rarely seen in Swedish. And what's with all the köpings?

There are also several place names in Sweden that might cause puzzlement to the uninitiated. Some residents of Snopptorp have complained about the bad jokes they are the subject of, living in a place whose name means 'penis croft'. But the name actually comes from Erik af Snoppenström, a prominent figure in Swedish history who worked with the horses of kings Karl XI and Karl XII and who had stables in the area that's now called Snopptorp.

Here's a look at what the names of Sweden's towns and cities can tell us about the country and its history.

The history of the Swedish capital's name is a question that has never truly been settled. We know that the holm in Stockholm means islet, which makes a lot of sense since the capital today is made up of 14 islands. Originally, it probably referred specifically to Stadsholmen, the island where the city was founded (and where most of the current Gamla Stan or old town district is found).

As for the 'Stock', this is believed to come from the older word Stokker, meaning 'log'.

It's possible that Stockholmers used upright logs to mark important spots such as markets, or that they were used to block shipping routes in order to collect tolls or prevent unwanted visitors from entering, as a form of defence. This western city is the only one in Sweden with an official English translation (the ö sound and soft 'g' at the end of Göteborg can be tough for Anglophones), and in fact the English and German name Gothenburg has been around for centuries, noted even in very early city documents. But let's consider the history of its original Swedish name.

The first half of the word comes from the Göta älv or Göta River which flows through the city to join the sea. The region which includes Gothenburg is known as Götaland because this was believed to be the homeland of the Gothic people, a northern Germanic population

And the second half, borg, means 'castle' or 'stronghold'; you'll see it in plenty of other city names too, such as Helsingborg further south. Before the 19th century, Gothenburg was a walled city, heavily fortified due to its strategic port position, hence its name meaning 'stronghold of the Gothic people'.

This city has also had various nicknames over the years, including Nya Amsterdam because Dutch planners were hired to build and design the city, which was marshy like many areas of the Netherlands. And it's also been called Lilla London (Little London) in honour of the many Brits who moved there during the city's industrial boom. Lots of location names in Sweden end in ö, which means 'island', and that's not surprising given the huge number of islands the country is made up of. But Malmö is an exception to the rule.

Malm has several meanings in Swedish, and in modern Swedish usually means 'ore', but an older meaning is 'sand' or 'gravel' (it's linked to the verb mala or 'to grind'), and this is where Malmö comes from. The city was called Malmöghae from the early 12th century, which literally meant 'piles of sand/gravel' – the second half of the word came from högar (piles/mounds) rather than ö, but over the years was shortened to its current name.

In fact, there was originally a small town called Övre Malmö (Upper Malmö), after which a neighbouring area, Nedre Malmö (Lower Malmö) was named. The latter became the city we now know as Malmö.

What you might not have realized is that there are multiple places across Sweden also called Malmö, and their names have the same history (you'll also find several other Stockholms and Göteborgs). Meanwhile, malm pops up in many place names, usually referring to areas outside the main city centre, for example the Norrmalm, Östermalm and Södermalm districts of Stockholm. This is a fairly easy name for anyone with basic Swedish skills to decipher. Stad means 'town' or 'city' in Swedish, and has done for many years, while Karl is the name of many Swedish kings, often translated as Charles in English.

Karlstad has been an important city since long before it had this name; since the Viking age, in fact. For a long time, it was called Tingvalla (ting referred to justice and administration) and a central neighbourhood of Karlstad is still known as Tingvallastaden.

In 1584, the site was officially granted city status, and that's when the word stad was incorporated into its name. Karlstad was named after King Karl XI, who at the time had not ascended to the throne and was a duke. The same Karl gave his name to Karlskrona, but Karlshamn in Blekinge got its name earlier, from King Karl X. Umeå is one of several northern destinations that end in the Swedish letter å, meaning 'creek' or 'stream' – did you know this word is related to the French eau, meaning water? So this is a simple etymology to deduce. The Ume River (Ume älv), one of the most important in northern Sweden, passes right by Umeå, so the name of the city literally means Ume stream.

Early documents referring to the city call it Huum, Vma, and Uma, but the first could be a misspelling. The river itself likely got its name from a Norse word meaning 'roaring', in reference to the rapids, although others have argued the name could derive from the figure Ymir in Norse mythology.

READ ALSO: Umeå loses fight to use its Sami name on signs

A lot of Swedish towns end in the word by, which today means 'village' but was earlier used to refer to larger towns, and Visby on the island of Gotland is one example.

The other part of its name comes from an Old Norse word, vi, which meant 'place of sacrifices' or 'holy place'. In some early writings, the village was referred to simply as Vi or Wi.

The town has been inhabited since at least the early first century AD, and its harbour, making it a good trading hub, is probably the reason it earned the name of by. Even today, it's still the only settlement on Gotland that can really be called a town. Many other settlements on the island have names referring to their waterside location, ending in vik (bay), holm (islet) or ö (island).

READ ALSO: The most Instagramable spots on Gotland The university town of Uppsala has a long history, and its name is at least 1,000 years old.

But longer ago, it was known as Östra Aros, meaning Eastern Estuary and referring to where the river Fyrisån met Lake Mälaren. This was a counterpart to Västra Aros (Western Estuary) which over the years became melded into one word, the city name Västerås.

Uppsala was the name given to a nearby town, the seat of the archbishop from the early 12th century. The seat was moved to Östra Aros about 100 years later and the name Uppsala moved with it, replacing Östra Aros, while the original Uppsala is today known as Galma Uppsala.

All slightly confusing, and to add to that, it's not entirely clear what Uppsala actually means. It was mostly likely named to differentiate it from another village called Sala, and the word sala could have been used to refer to a ceremonial building or just to buildings in general. These mountains would turn out to be crucial in the city's mining industry, and in the late 19th century plans began to be drawn up to start mining the ore and build a town in the nearby area. Kiruna was suggested as a shorter name that was easy for Swedish-speakers to pronounce (note that the Finnish double 'i' was reduced to a single one). And that's the name that's stuck.

This is a name with a confusing story behind it. It's also known as Jåhkåmåhkke and Johkamohkki in the indigenous Sami languages, while the Sami name Dálvvadis ('winter settlement', from dálvve meaning 'winter') is also used. The area has long been a place where Sami have stayed during the winter, and even today is famous for its winter market in February.

Jåhkåmåhkke literally means 'bend in the brook/stream', but there is no stream that matches this description in the area. The name is thought to have originally included the word muorkke, a Sami word describing a strip of land between two rivers, which more accurately describes Jokkmokk's geography. If you've spent much time around the south of Sweden, you'll have seen the word köping pop up on a lot of city names, including the town of Köping, as well as Linköping, Nyköping, Norrköping and more.

Swedish learners might recognize the root of the verb köpa (to buy), and that's where these towns get their names: köping was used to refer to market or trading towns. In the mid 19th century, the Swedish government gave a few dozen of the country's 2,500 municipalities the right to be a city (stad). A further eight places were defined as köpingar, which was a midway status between städer and municipalköpingar. The number of köpingar rose to reach 95 over the following century.

Many of the towns that incorporated köping into their name later became official städer, but their names often didn't change. In the early 1970s, many of the distinctions between different municipalities were removed, so you won't hear the word köping used much, but it lives on in multiple towns.

As for where the first part of the name comes from, this is less obvious than in the case of Nyköping or Norrköping, where the prefixes denote location. One theory is that Linköping was named after the historic Lionga ting assembly in the area, and one document dating back to the 1100s names Liunga Kauping in a list of Swedish church locations.