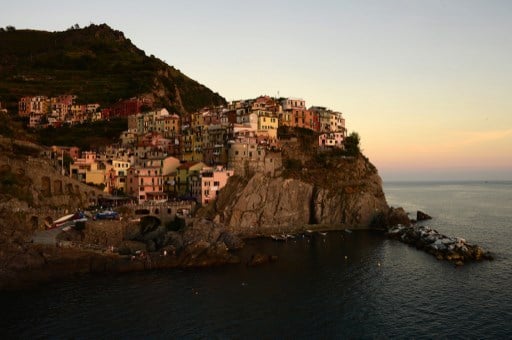 If you’re planning a trip to Italy’s famous Cinque Terre region this year, we’ve got two pieces of advice: expect bigger crowds than ever, and choose your footwear wisely.

Italian officials are threatening to fine holidaymakers up to 2,500 euros for walking along its scenic trails in flip flops, sandals or other unsuitable footwear this summer, as rescuers say they’re fed up of having to save inappropriately-dressed daytrippers stranded on the steep, narrow footpaths.

“The problem is that people come here thinking they are at the seaside, but the paths above the villages are like mountain trails,” Patrizio Scarpellini, the head of the Cinque Terre national park, told Italian media. Posters and leaflets advising people not to wear flip-flops, pumps or other flat-soled shoes on the trails will be distributed  the fishing villages that make up the Cinque Terre, on the Ligurian coastline.

Police and national park staff will also be checking visitors’ footwear in the “collaborative” phase of the campaign, Scarpellini said, before they later start issuing fines to holidaymakers who ignore the warnings.

Rescuers based in nearby Genova said they’re frequently called out to help stranded tourists in the Cinque Terre, with helicopter rescues costing the Italian emergency services up to five thousand euros an hour.

“We use the helicopter to rescue a lot of holidaymakers. Usually they’ve fallen down along the road of the Cinque Terre or they’ve injured themselves because of a lack of experience or equipment,” one rescue helicopter pilot told The Local.

READ ALSO: Italian hotspots struggling with 'too many tourists'

As the Cinque Terre gears up for the 2019 holiday season, authorities only expect the problem to get worse. Visitor numbers are set to double this year, with a surge in the number of Chinese visitors meaning more cruise ships than ever are expected to arrive at the Ligurian port of Spezia.

The scenic region records 2.5 million visitors a year, with 450 thousand of those arriving in summer last year. This year 750 thousand are expected between April and September, Scarpellini said.

“This means doubling the number of visitors who will pour into the Cinque Terre,” said Scarpellini. “For this reason we have already started trying to find ways to cushion the impact of this mass.”

“We’re studying routes of access or return that include visits to museums, historical sites or monuments that could slow down and divide the flow.”

Some estimates put the number of tourists arriving in the region annually at 2.5 million.

Experts have been warning for years that an unsustainable level of tourism is choking the life out of the Cinque Terre’s towns of  Monterosso al Mare, Vernazza, Corniglia, Manarola and Riomaggiore, all located inside the Unesco World Heritage national park.

In the last few years, an increasing number of daytrippers arriving in the Cinque Terre has provoked criticism from local residents as well as holidaymakers who stay in the region for a longer period of time.

There has been some discussion of limiting access to the area's coastal paths but, in the face of the region’s lucrative tourism industry,  so far it hasn't come to much.

The Cinque Terre is not alone. Other iconic Italian destinations like Venice, Florence and Capri are also feeling the strain of overtourism, leading to the introduction of measures like Venice charging an entry fee from this year.