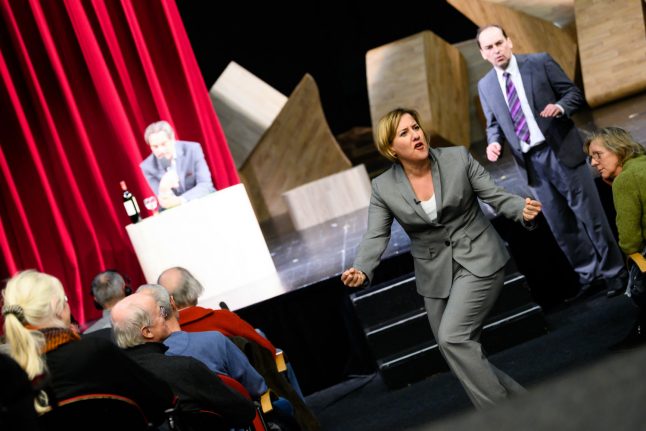 The veteran leader affectionately known as “Mutti” (mummy) plans to close the curtain on her marathon reign by 2021, but the Bremen Shakespeare Company has wasted no time imagining her legacy.

The play which premiered Thursday is neither political cabaret nor is it a biographical take on the pastor's daughter who grew up behind the Iron Curtain and went on to lead the top EU economy for 13 years so far.

Rather it is a non-linear, experimental collage of scenes in a “future history” centred on the themes of a democracy in crisis, populism and a deepening chasm between politicians and the people.

In the play, Merkel, long dubbed the “eternal chancellor”, is finally out of office, and sharing a cigarette with her former driver (she doesn't smoke in real life). Around her, democracy is falling apart, symbolised by a scene where the eagle that hangs in parliament takes flight and escapes with the jarring sound of a screeching vulture.

In one scene children riot amid dry ice that wafts like teargas or smoke as the set collapses. They wear the yellow vests used both in German kindergartens and by French street protesters.

“We start the play with Merkel gone, and there I have some dystopian visions,” said the author Katja Hensel.

“Despite all criticisms I have, I do believe it will be difficult because Merkel brought a lot of stability to a Europe that has been looking quite shaky.”

Back in the real world, Merkel, 64, has seen her share of backstage manoeuvres and power plays that last year rang in the beginning of the end of her chancellorship.

Merkel has said she won't run again when her current term ends in 2021, and some expect she won't last that long if her unhappy left-right “grand coalition” implodes before then.

In upcoming regional elections in ex-communist eastern Germany — where many despise Merkel for her 2015 welcome to a mass influx of refugees and migrants — CDU candidates are shunning Merkel rather than asking her to campaign for them.

“There is an election campaign in eastern Germany, and she as chancellor is asked not to campaign for her own party in her own home region,” Hensel said.

“To me that's a true tragedy, something that I'm sure the most powerful woman in Germany, if not Europe or even the world, would have liked to turn out differently.”

On stage, Merkel's character, played by Silke Buchholz, voices her antipathy to those disenchanted East Germans who lean toward authoritarian political systems.

“Those East Germans who don't want this system are so alien to me,” exclaims Merkel, herself raised an “Ossie”, the nickname for the former East Germans.

“But even more alien to me are the West Germans who won't defend this system,” the character adds, sporting Merkel's trademark pantsuit and blonde hairdo. Merkel, long considered an anchor of stability, saw the central drama of her leadership with the turbulent refugee influx that eventually brought over one million asylum seekers.

She was initially cheered for the humanitarian gesture of letting them in, but quickly suffered a strong backlash from political forces that reject immigration, multiculturalism and Islam.

The far-right Alternative for Germany (AfD) party entered parliament in 2017, while handing bruising losses to Merkel's CDU and her coalition allies the SPD.

Attacked with increasing ferocity from within her conservative bloc after further regional election setbacks, Merkel last year stepped back from the chairmanship of her Christian Democratic Union.

The job went to her anointed successor, Annegret Kramp-Karrenbauer, usually dubbed “AKK” because of her tongue-twister name.

While Merkel remains very much in charge of the government, and has become more outspoken in her final stretch, she has also taken symbolic steps in her long farewell, including deleting her official CDU Facebook account.

Just days ago she stayed away from a CDU leadership meeting, which meanwhile agreed to further dismantle her immigration legacy with a plan called “Humanity and Toughness” that aims to claw back votes from the AfD.

But as Merkel's final bow looms, director Stefan Otteni said she has so far been both “clever and lucky” in plotting her exit.

“She was clever to announce her own departure, and then she was lucky that AKK got elected, because I don't think the crown princess will behead Angela Merkel,” he said.

“She will be the first chancellor who is not chased out of office,” he predicted, judging that “this will make her era perfect.”

SEE ALSO: End of an era: What you need to know about Merkel's planned departure