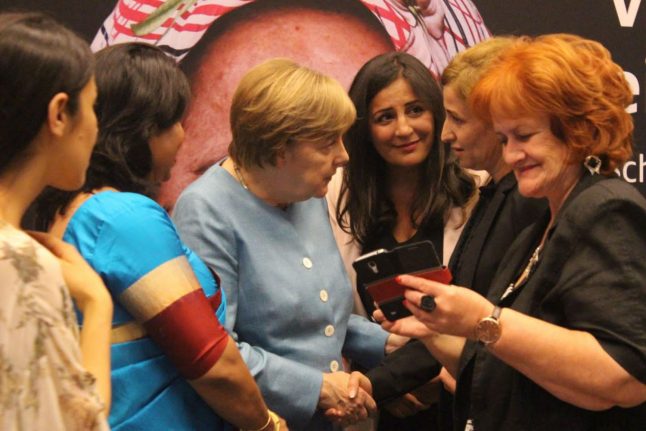 When Düzen Tekkal announced that she was going to Iraq in 2014, almost nobody could understand why.

It was just after American journalist James Foley was brutally beheaded in Raqqa, Syria by Islamic State (IS) jihadists, further confirming that this region was one of the most dangerous places on earth.

But Tekkal felt she had to be in this part of this world – because she wanted to tell the stories of her people.

“I went there as a journalist, became a war writer overnight and came back as a human rights activist,” Tekkal, 40, tells The Local.

'ISIS made us popular in a bad way'

Tekkal was born and raised in Hanover, Lower Saxony, with Kurdish/Yazidi roots. Her parents came from Turkey as Gastarbeiter –  migrant workers who moved to West Germany as part of the guest worker programme – and for religious and political reasons.

When Tekkal was young, she can remember her father saying she should become a politician or journalist.

“I asked him why, and he said: ‘because you have to tell the story of your religion.’”

Tekkal did just that. She studied and forged out a career in journalism, and wrote about the Yazidi religion and its people. But no-one was interested at that time, she says.

In 2014 when IS came to Yazidi towns and villages in northern Iraq, expelling and massacring civilians, and forcing women and girls into sexual slavery, everything changed.

“ISIS made us popular in a very bad way,” Tekkal says. “From that moment, everybody was interested in the Yazidi story.”

There was only one person who understood why Tekkal wanted to go to Iraq: her father. “Therefore we went there together,” she says.

Tekkal founded an NGO called Hawar.Help which aims to build a peaceful world “out of the ashes of genocide”. Hawar translates to 'genocide' in Kurdish.

Through documentation, women’s empowerment projects and educational initiatives the NGO aims to stop this kind of atrocity from happening again as well as give back control to survivors.

During Tekkal’s frequent trips to Iraq, she spoke to families and women affected by the genocide. One of those women was Nadia Murad, who went on to win the Nobel Peace Prize last year jointly with Congolese physician Denis Mukwege. They were given the award for their work and tireless campaigning against sexual violence in war.

In 2015 Murad had come to Germany as part of a special project for female victims of violence offering physical and emotional care. She was one of more than 1000 women and children to benefit from the refugee programme of the state government in Baden-Württemberg.

Tekkal had pushed for the initiative – and she has also recently managed to campaign successfully for another German state to allow Yazidi survivors to live there.

Earlier this month Germany's Interior Ministry approved a reception program for Yazidis from Iraq in the eastern German state of Brandenburg. The project aims to provide shelter for Yazidis who were persecuted by IS and who suffered traumatic experiences at the hands of the terror group.

“We fought a lot for that, to raise awareness,” Tekkal says.

'We need a new way of migration'

But Tekkal believes Europe should do even more for refugees.

“Some Yazidi people from Iraq are not accepted by the government to stay here,” says Tekkal. “What I try to say is: this genocide is not as far away as you think. The people who killed our people are dangerous for the whole world.”

Tekkal says we have to “create a new way of migration, integration and asylum”.

“I see myself as a translator between worlds,” she adds. “I have experiences in Iraq, Kurdistan and Syria and then I come to Germany and say what’s happening.”

Tekkal also meets other humanitarian workers and organizations to discuss how to take action. She gave a speech and came together with a range of activists at the Aurora Dialogues, which was held in Berlin in December.

“It was very interesting,” Tekkal says. “It was the first time I had met the Rohingya people for example. On the one hand it’s unsettling, but on the other hand it’s good to stand together.”

There is also a lot of work being done on the ground. “We have a women empowerment centre in Iraq, we are doing that together with the German development minister and we will take care of 840 women who were in the hands of the IS in the next two years.”

The aim is to allow women to gain power and control back through different educational courses and groups.

“When we are saying we can’t take everyone in the world to Europe, we have to make their situation better,” says Tekkal, pointing out why there must also be European projects in war-torn regions. “We need new solutions.”

'We have to take care of the evil twins'

When it comes to integration in Germany, Tekkal says there is a huge problem.

“As a Yazidi women I always saw the problems from both sides — from the right wing and racism side but also from the religious extremist side,” she says. “We have to take care of both things, I call them the evil twins.”

Tekkal has one way of addressing the “evil twins”: by focussing on the #GermanDream. Tekkal launched a social media campaign with this hashtag, in a similar vein to the #MeTwo campaign which was started by author Ali Can, highlighting Germans with a migrant background.

But Tekkal says the hashtags are more than just a gimmick.

“We are all the GermanDream!”

She plans to go to schools in Germany and talk to pupils about their own personal “German dream” and how everyone shares the same values, whatever their roots are.

“What does it mean to be German nowadays? I want to make clear that everyone who is part of our values and was born here with different roots is part of the German dream,” she says.

When Nadia Murad won the Nobel prize it was a special moment for Tekkal.

“Nadia for me is a German dream,” says Tekkal. “She gets asylum here, she gets a chance here and then she became the voice worldwide.”

She remembers the first time she spoke to Murad, in a small tent on the frontline of war-ravaged Iraq.

“I’m so proud that she got this because of her braveness to talk about what happened to her,” says Tekkal. “She broke the silence.”

Tekkal says there are a lot of Yazidi women out there who, like Murad, want to speak out and get justice.

“It’s my job to empower these women,” says Tekkal.