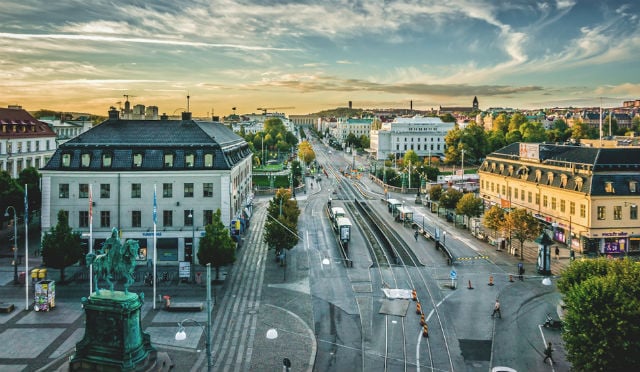 Beyond the revitalization of the downtown riverfront area, the greater Gothenburg region comprising 18 nearby municipalities is also booming. By 2030, the Gothenburg labour market is expected to expand to 1.75 million inhabitants from the roughly 1.17 million living in the area today.

While Gothenburg residents can literally see the €100 billion investment projects take shape right before their eyes, the view to the future goes far beyond the city’s borders.

Along the northern bank of the Göta Älv river in what was not too long ago a derelict shipyard district, Lindholmen Science Park is a bustling centre of activity that promises to shape the global future of transportation, mobility and connectivity.

There, six of Sweden’s largest and most-established firms, including household names like Volvo and Ericsson, collaborate with young startups from around the world to influence how all of us will get around in the years to come.

The collaborations take place under the umbrella of MobilityXlab, an initiative founded in October 2017 to give emerging companies the possibility of strategic partnership with the six partners.

“We have a vision to bring future mobility closer by finding new innovations and solutions,” MobilityXlab director Katarina Brud said. “One way to do that is for large corporations to work closely with emerging companies. It’s often very difficult to change the culture within these old traditional huge companies, so we create an ecosystem that supports collaboration with the younger and more nimble startups.”

With the six large Swedish firms – Ericsson, Volvo Cars, Volvo Group, Veoneer, Zenuity and CEVT – already collaborating to MobilityXlab, some 30,000 people are in the science park every day and 13,000 work in the area. That number is expected to double in the next five years due to a great interest from all over the world to invest in the area and to a general growth linked to the urban development.

The mix of global powerhouses and innovative startups has made Lindholmen “truly the place to be,” Brud said.

“Gothenburg has an established culture of being open and collaborative. What we are trying to do is accelerate that a bit and shift toward being even more open,” she said. “The large companies that I work with understand that we have to work not only with each other but with emerging companies from around the world. I think that is very unique.”

The MobilityXlab initiative has brought over 15 startups to Lindholmen, all with their own contributions to what Brud calls “a race to the future” to shape transportation, mobility and connectivity.

“If I had a crystal ball I could tell you what transportation will look like in the future, but I really don’t know. To me, that is what is so exciting,” Brud said. “We don’t know how you will own and use a vehicle in the future, or if we’ll even be using cars at all, so a company like Volvo needs to really think in new ways and that’s where these partnerships can really help.”

While many of the startups involved in MobilityXlab are Swedish firms, including several already based in Gothenburg, the initiative has also brought in companies from Canada, Germany, Silicon Valley, Israel and Finland.

“We like the mixture of traditional industry and forward-looking innovations we have seen in the city so far. Swedish city infrastructure and services are world-leading and provide ample opportunities for foreign professionals to accommodate their career and personal lives in the city,” he said.

For Brud, who grew up on an island about an hour north of Gothenburg, the city’s transformation has been a sight to behold.

“Ten years ago there was not a lot of energy and movement but today it is a really exciting international melting pot. For innovation, we need diversity, trust and collaboration and that is what we have in Gothenburg,” she said.

This article was produced by The Local Creative Studio and sponsored by Business Region Göteborg.