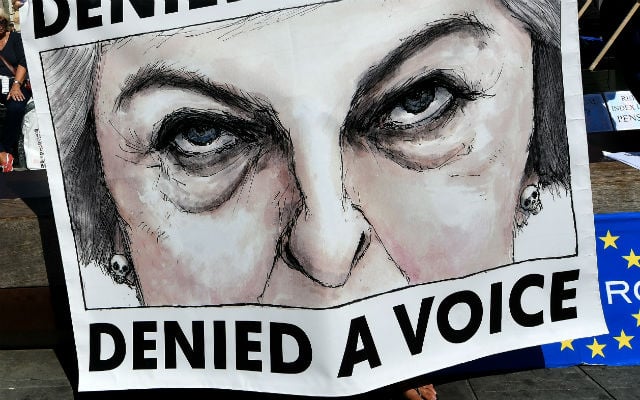 Last week a team of volunteers in different parts of France worked late into the night trying to interpret the newly published French law that spells out what will happen in the case of a no-deal Brexit.

The law is hugely important for the lives and futures of 150,000 Brits in France.

The volunteers, who form the “citizens rights” team at Remain in France Together (RIFT), put aside their normal lives and got on with the job of providing information to the thousands of anxious Brits who were waiting desperately for news of what their futures might hold if Britain crashes out of the EU in a few weeks' time.

These are the same team of volunteers who have spent their own money travelling to Paris to lobby the French government to alert them to the issues Britons are facing across the country.

Of course, it's not just in France where unpaid volunteers have taken it upon themselves to explain the impact of Brexit on health cover, driving licenses and residency rights and basically to stick up for the citizens' rights of anxious Britons, whose lives and health have been damaged by nearly three years of limbo.

The coalition group British in Europe, with linked campaign groups across the EU, has led the way in campaigning and lobbying from Brussels to London and from Berlin to Strasbourg, meeting with UK and EU politicians to fight for the rights of Britons.

In Italy unpaid campaigners from the group British in Italy have actively lobbied the Italian government, which eventually led to Rome becoming the first EU government to guarantee the rights of British citizens in the country in the event of a no-deal Brexit.

Some campaigners say they risk losing their jobs, most say they have already lost their social lives. All have had to dig deep into their savings.

But they know that thousands of worried British citizens now look to them for support, information and advice, more than they do their own government. But why have the livelihoods of 1.2 million British citizens – that's more than the combined populations of Liverpool and Manchester – across the EU seemingly been left in the hands, albeit very capable ones, of volunteers?

And why have the top ministers in the British government and Prime Minister Theresa May refused to meet those representing the 1.2 million in the last two and a half years?

“Whilst I do believe that those we have met have a genuine desire to help us, they are hampered by the prime minister's desire to limit the rights and freedoms of EU citizens in the UK,” says Bremain in Spain's Sue Wilson.

Wilson says her campaign work has left a deep hole in her pocket.

“It has cost me thousands of pounds (I've stopped counting!) of my own money, which as a pensioner I can ill afford, and I'm working longer hours than I ever did during my career.”

Delia Dumaresq from the group British in Italy summed up the difficulties they faced. “We are a committee of seven and for some of us, it is a full-time job. We do not have any funding, nor even the means to cover our travel costs which are increasingly onerous as we try to reach more and more British nationals resident here,” she said.

Would other EU countries such as France, which provides MPs for its overseas residents and has passed a law to protect the rights of those who return from the UK after Brexit, really have left so many of its citizens to fend for themselves like this?

The British government hasn't been entirely idle, of course or at least its embassies haven't.

Embassy staff have met with these volunteer groups to hear their concerns about the real issues on the ground and they have passed them on in meetings with officials from interior ministries of EU governments.

Sometimes those messages are heard.

British embassies across the EU have also been holding “outreach” meetings in most countries, which have been attended by thousands of British citizens.

But despite a genuine desire to help on the part of officials, many of those who went to meetings in France report that their questions mostly go unanswered.

That's not necessarily the fault of the embassy staff or the ambassador, of course. Concrete information has been hard to come by over the last two years and often they have come under fire for being the Brexit messenger.

But the simple fact is Theresa May – and her speeches over the last two years give this away – has never made the 1.2 million Britons who took advantage of freedom of movement her priority.

British in Italy's Delia Dumaresq said: “Have we had adequate support from the Embassy or the British government? In a nutshell: no.

“The British government, despite insisting that our citizens' rights are its priority, has done nothing to assist us or any of the other British in EU groups to reach as many British nationals as possible, to inform them of their rights and of what may follow,” she said. “We've always made the running – requesting meetings with the embassy, providing copies of documents we have prepared for the Italian government.

“When it comes to reaching out to the wider audience of British nationals living in Italy, providing them with information on their rights and on events as they unfold in the Brexit pantomime, we certainly have done a lot more [than the embassy].”

But as crunch time approaches it's still not too late for the British government to show some real interest in 1.2 million people and take the burden off these under-pressure volunteers. Or at least share it.

As for what embassies could do to help, British in Italy's Delia Dumaresq suggests “an advertising campaign to inform British nationals here of their existing rights – to advise people to register with their local commune, or exchange their British driving licence before March 29th, to inform them that the Italian government has assured us British nationals will not be 'illegal' after March 30th in the event of a No Deal.”

The embassy could provide “considerable help” by setting up a helpline with information on people's rights, on where to find more information on specific areas and/or with a person that a caller could speak to, British in Italy suggests.

“Such wider 'publicity' that the embassy could give to these issues with their Brexit budgets would assist enormously. People are frankly worried sick about what will happen to them, their families, their jobs, their homes and almost more importantly, their healthcare after March 30th,” said Dumaresq.

These measures could be taken by embassies across the EU if the foreign office responded to their call for help.

Brits can at least for now rely on campaigners, as Bremain in Spain's head Sue Wilson pledges.

“It's not like I have a choice – I've never felt so strongly about anything in my entire life, and no matter what happens next, I'll be in this until the end.”