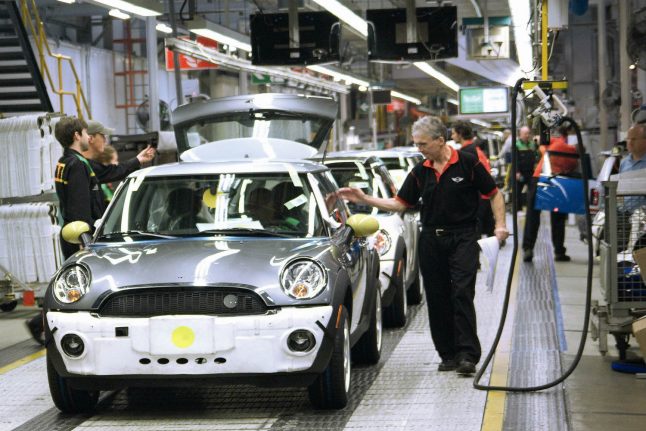 “A chaotic Brexit is coming dangerously close,” Federation of German Industry (BDI) director Joachim Lang said in a statement, warning that more than €175 billion of German-British exchanges in goods and services could be affected.

“The top priority must be to avoid a hard Brexit,” Lang added. “Responsibility for that lies solely with the government and the opposition in London.”

British Prime Minister Theresa May faces a no-confidence test in Westminster late Wednesday after MPs rejected her hard-fought pact with Brussels by 432 to 202 votes on Tuesday.

Without a withdrawal agreement, Britain will abruptly tumble into “third-country” status after March 29th and face regulatory and tariff barriers to trade with the EU, rather than enjoying an almost two-year “transition period” when present rules will still apply.

For firms, “I believe it won't be possible to prepare properly for the chaos,” Martin Wansleben, director of the Association of German Chambers of Commerce and Industry (DIHK) told public broadcaster SWR2.

Governments on both sides must agree “transitional solutions” to preserve the most essential trade even in case of no deal, Tillmann said.

“In particular, this is about supplies of medicines in the UK.”

Tough impact on the auto industry

Wansleben pointed to the car industry with its continent-spanning supply chains as a key sector that would be disrupted by Brexit.

“If they no longer have the same rules as in Europe, if they must pay tariffs, then it's increasingly unrealistic or no longer economically rational to produce for all of Europe in such a country,” he said.

Germany's car industry is present in the UK with production sites like BMW's Mini plant in Oxford or two factories belonging to Vauxhall, a subsidiary of Peugeot-owned Opel.

“Without an orderly and workable solution for economic exchanges, jobs in the car industry are at risk, especially on the British side,” warned Bernhard Mattes, president of the VDA carmakers' federation, a lobby group which represents top car companies like Volkswagen, BMW and Daimler.

A statement by the VDA furthermore warned of “fatal” consequences in the event of a no-deal exit.

“To reject the withdrawal agreement without there being a concrete alternative for another viable option is politically negligent,” Eckehart Rotter, a spokesman for the VDA, wrote in a statement shortly after the vote.

“Everyone involved should now act prudently and work to prevent a hard Brexit. Against this background, the postponement of the withdrawal date may make sense, as long as substantial progress can be achieved.”

“A tough Brexit would have serious consequences for citizens and businesses in the UK and Europe,” added the VDA. “The companies on both sides of the English Channel are very closely linked. Without orderly and workable solutions for commercial transport, jobs in the automotive industry, especially on the British side, are also at stake.”