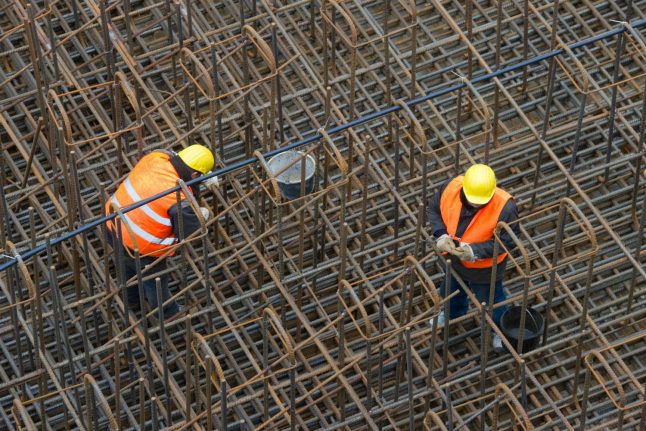 “People are often illegally employed in these sectors and these workers will go to Germany,” said Inglot, whose agency recruited 9,000 Ukrainians on behalf of Polish employers.

“But for those who are legally employed in Poland, there will be less incentive to move given the higher cost of living in Germany,” he added.

With many working for a few months and then going home, it is difficult to pin down exactly how many Ukrainians work in Poland, but cautious estimates suggest more than a million.

They fill a yawning labour gap that emerged when some two million Poles sought better-paid jobs in western Europe, mainly Britain and Germany, after their country joined the EU in 2004.

Poland's Union of Entrepreneurs and Employers (ZPP) first sounded the alarm about a possible fresh labour exodus in November when it got wind of German moves to open the job market of the EU's largest economy to non-EU nationals.

Those looking jobs such as cooks, metallurgy workers or IT technicians would be allowed to come for six months to try and find employment, provided they can financially support themselves.

The Bundestag is expected to consider the legislation later this year.

Official statistics show that around 140,000 Ukrainians currently work in Germany, although the real number is likely higher as those who have obtained Polish visas can cross into Germany, where salaries can be up to three times higher depending on the type of job.

With their workforces ageing, Poland and Germany are competing to fill labour gaps experts believe are bound to grow in the coming decades.

Poland has experienced expansion each year since it shed communism in 1989 and is one of the EU's fastest growing economies.

While its right-wing PiS government forecasts a 3.8 percent growth in 2018, international institutions like the OECD are more bullish, predicting 5.2 percent but warn that a labour crunch could slow that to 3.3 percent by 2020.

But according to a worst-case scenario set forth by Polish employers, Poland's GDP could decline by an estimated 1.6 percent should half a million Ukrainian workers leave.

Germany currently has 1.2 million vacancies on its labour market.

The nation of 81 million people is expected to need 12 million new workers over the next three decades.

The ZPP employers association estimates Poland, which currently has a population of 38 million, will need five million migrant workers by 2050.

For many Ukrainians, working abroad has become a lifeline.

Living standards in Ukraine are well below that of its western neighbours and the nation is struggling with the economic and social fallout of an armed separatist conflict in its east.

Officials estimate 3.2 million of the country's 45 million population have permanent jobs abroad while seven to nine million find work on a seasonal basis.

They sent about €10 billion back home to their families last year, according to Sergei Fursa, a Ukrainian economist working for Dragon Capital investments.

Poland is a popular destination for Ukrainians seeking work abroad because it is close and has a similar culture and language.

“Poland is our first natural destination,” Igor, a bicycle mechanic who has been working in Warsaw for four years, told AFP.

“The language is easier for us than German or English, it's closer to home, we can make friends easily.”

But higher wages are tempting many to leave.

Nearly 40 percent of Ukrainians working in Poland said they are considering seeking work in Western Europe, according to a survey by the OTTO Work Force employment agency quoted by Poland's Rzeczpospolita daily.

To avert a possible exodus, the ZPP wants the government to streamline procedures for hiring foreigners, to offer them permanent residence and even a path to citizenship.

Poland is slated to extend work visas from the current six months to a full year, Inglot said, adding that he hopes for a further extension to 18 months.

Similar measures are being prepared or have already been adopted in the Czech Republic and Slovakia, two smaller EU economies that are reliant on car production and are also facing shortfalls of workers.