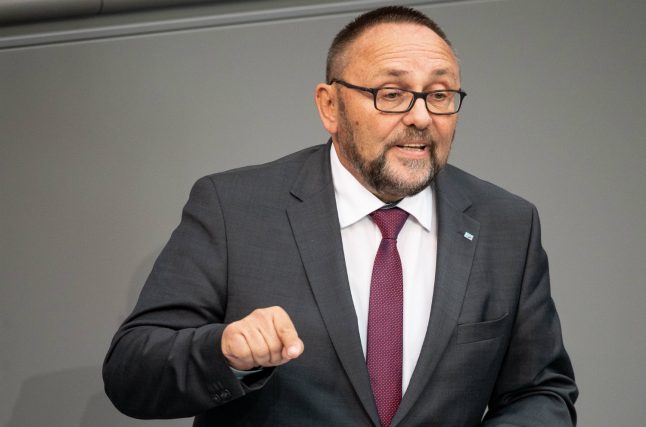 Magnitz, who is chairman of the the anti-immigration AfD in Bremen, in the north of the country, and a member of parliament in Germany, was assaulted in the city centre on Monday afternoon. Police said the attack took place in front of the Theater am Goetheplatz at around 5.20pm.

“Given the victim's work, we believe that this is a politically motivated act,” police said.

The AfD party in Bremen published a shocking photo that showed the injuries. In the picture, Magnitz is unconscious on a hospital bed, his face bleeding and swollen with a gash on his forehead.

The statement by AfD Bremen said three people with their faces covered had carried out the attack. Magnitz had attended a New Year's reception hosted by local newspaper the Weser-Kurier before the assault, party officials said.

“They hit him with a piece of wood until he was unconscious and then kicked him on the ground,” a statement from the party said, adding that a construction worker had intervened to stop the assault.

The party said it would be watching closely how politicians react to this attack. “Today is a black day for democracy in Germany,” the statement added.

“The state executive committee and the members of the AfD state association are shocked,” continued the statement. “We wish Frank Magnitz a good and quick recovery.”

AfD politician Jörg Meuthen said on Twitter that Magnitz was “beaten half to death”. He added that he was “devastated” and described it as a “cowardly and repugnant attack”.

Police are investigating and urged anyone with information to come forward.

The attack was condemned by opposition politicians and commentators, including Cem Özdemir of the Green party. He said on Twitter that he hoped the perpetrators would be caught.

“There is no justification whatsoever for violence,” even against the AfD, he added. “Those who fight with hate only allow hate to win in the end.”

Foreign Minister Heiko Maas of the SPD said on Twitter: “Violence must never be a means of political confrontation – regardless of who or what the motives are for it. There is no justification for this.”

Johannes Kahrs, an MP from the Social Democrats, junior partners in the ruling coalition, said “violence is never acceptable” and that “extremism in any form is rubbish”. He wished Magnitz a quick recovery.

Last week, an explosive device detonated in a rubbish bin damaged an AfD office in Döbeln, Saxony. Police reportedly arrested three men from Döbeln but they were later released. Authorities said there was not sufficient evidence to detain them in custody.

The AfD, which has a strong anti-immigration stance, entered Germany's parliament with almost 13 percent of the vote in September 2017.