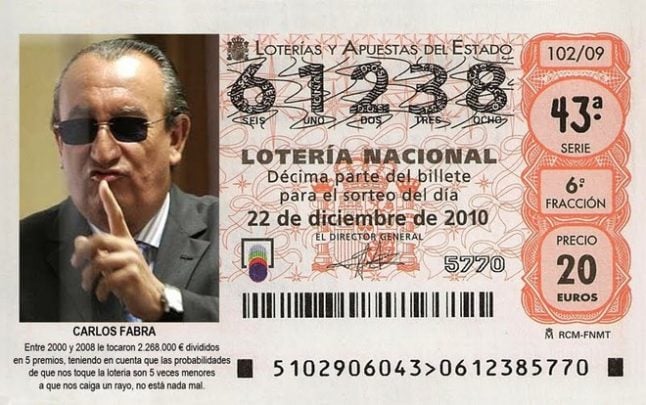 What’s the best way to launder a large amount of money without having to set up some sort of shell company or tax haven bank account?

For Galician drug lords in the 80s and 90s the answer was Spain’s generous and popular lottery scheme.

Notorious cocaine traffickers Los Charlines started the illicit trend by locating the winners of la Lotería and offering them even higher amounts for their winning tickets.

The narcs would then provide these providential tickets – time and time again – as proof to judges that their loaded bank accounts were just a result of some good old luck, rather than cocaine profits.

Before long town councillors, mayors and all sorts of Spanish politicians were also trying their luck at cashing in on the legal loophole.

If El Gordo or any other big lotto rollover fell in the district or province close to them, they’d use their status and power to wangle the winning tickets.

But the crafty lotto scheme did leave Spain with some truly scandalous stories that are worth reviewing, at the very least to remember just how overtly corrupt Spanish politics was at its peak a few years back.

It’s fair to say without fear of defamation that if you were a politician in Marbella in the nineties and naughties, chances are you had your fingers in a handful of stinky pies.

Juan Antonio Roca, town councillor for urban planning in the ritzy town on the ‘Costa Nostra’, was one of these shady characters, purportedly getting his hands on 50 jackpot lottery tickets over the course of 15 years to launder his bribes and public coffers thievery.

During Marbella’s 2006 Operation Malaya anti-corruption trial, the man known as “Mr Big” in his inner circle only owned up to embezzling €646,000 from lotto tickets between March and September of that year.

The former urban planning adviser ended up landing 11 years in prison for his role in bribing town officials for building permits.

Imagine a politician who always wears sunglasses, who has won the lottery nine times, and who has even had a statue erected in his own honour.

That’s Carlos Fabra, former PP chairman of Castellón Council for 22 years, who The Local profiled in 2013 under the headline “Is this Spain’s shadiest character?”. Between 2000 and 2011 the man behind the city’s notorious ghost airport pocketed more than €2.2 million in lottery prizes.

‘Mr Shady’ was so used to getting away with murder that in 2008 he announced publicly what his lotto number was before the winners had even been announced, adding “If I win, I’m going to pull my Johnson out and wee on the United Left’s headquarters”.

He did have the winning ticket but it remains unclear whether he delivered on his promise.

Here’s another Valencian official who took lotto laundering a tad too far, to say the least.

Crespo, vice-president of Valencia Council and mayor of the town of Manises, couldn’t resist the chance to cash in when the second highest Spanish Christmas lottery prize fell in his municipality in 2010.

When he stood before a judge the following year, prosecutors found evidence that he’d distributed €22,7 million euros in winning tickets between his family members.

The amount he stole from Manises’s public coffers was in fact double that, and though Crespo did go behind bars for his role in the Emarsa corruption scandal that engulfed his region’s politics, he was absolved in 2016.

Chicharerros – as the inhabitants of Santa Cruz de Tenerife are known – were happy to see the back of quite possibly their dodgiest mayor, Miguel Zerolo.

With up to 145 winning tickets, the party-loving politician bought himself a country house in the mountains and accounted for €670,000 in allegedly legal earnings during the mid 2000s.

Fortunately the long arm of the law did end up catching up with Zerolo in 2017 for his involvement in the Teresitas scandal, an embezzlement racket involving the city’s main beach which allowed local politicians and businessmen to syphon off €100 million in public funds.