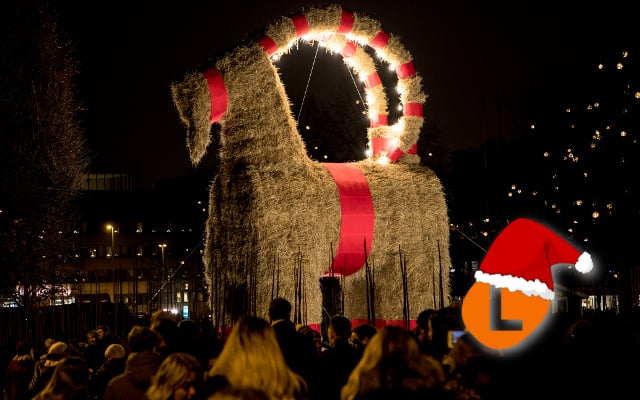 This article is available to Members of The Local. Read more articles for Members here.

These days, the julbock (Christmas goat) is mainly a popular piece of holiday décor fashioned out of straw that gets global media coverage when a giant version, the Gävle goat, is inevitably set ablaze by arsonists.

In spite of, or perhaps because of, the julbock's popularity as a symbol of Swedish Christmas, the rich history and multitude of meanings that have made it a symbol are often overlooked. You may see these in plenty of Swedish homes around Christmastime. Photo: Janerik Henriksson/TT

Like Sweden's Lucia tradition and the jultomte, the earliest roots of the julbock go back to pagan traditions.

One school of thought takes the origin story of the julbock back to the Norse god Thor, who rode a chariot pulled by two goats. Author Sue Weaver offers an engaging description of how this tradition was adapted in Sweden: “…as part of an ancient midwinter celebration called the juleoffer ('Yule sacrifice'), a man dressed in goatskins and carrying a goat-head effigy portrayed one of Thor's goats. He was symbolically killed but returned to life exactly as the sun does at Yule. Early Christian fathers, however, were not pleased with this pagan spectacle and proclaimed the julbock ('Yule goat') a demon”.

The julbock was adapted accordingly, losing most of its sharp edges by the 1800s, when it was firmly established as the benevolent bearer of gifts on Julafton (Christmas Eve). Benevolent though it may have been, the julbock – or someone dressed up as it – could still be an intimidating figure, as the two children in Swedish writer Elsa Beskow's beloved Christmas book, Peter and Lotta's Christmas (Petter och Lottas Jul), demonstrate. A julbock at the Skansen Christmas market in Stockholm in the 1940s. Photo: Bertil Norberg/TT

Perhaps not surprisingly, as the jultomte was being popularized in the late 1800s by the likes of Viktor Rydberg and Jenny Nyström, it was also gradually replacing the julbock as the symbol of Christmas giving.

But instead of being relegated to the shadows, the julbock was given a supporting role in the new narrative by the same artists perpetuating the image of the jultomte. In their iconic illustrations, Jenny Nyström, Elsa Beskow and Carl Larsson, among others, even managed to return to the pagan origins of the julbock by frequently featuring it pulling the sleigh of the jultomte.

Still, the shift from an active to a passive role in the celebration of Christmas undoubtedly contributed to consigning the julbock to its current status as little more than a decoration.

Each day until Christmas Eve, we're looking at the story behind one Swedish festive tradition. Find the rest of our #SwedishChristmas series HERE.