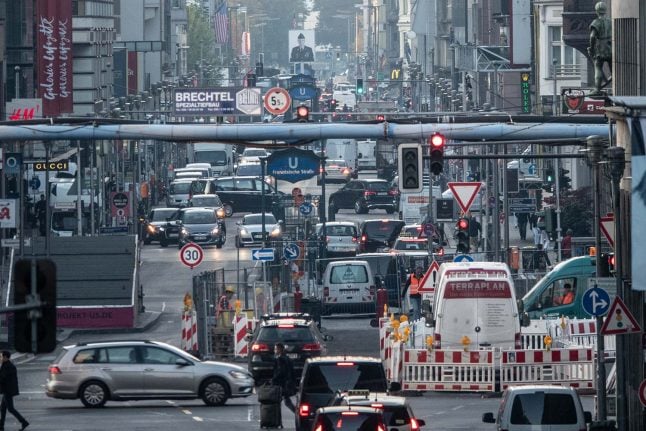 For two hours on the third weekend of December, one of Berlin’s busiest and most famous streets will trade the screeching of tyres and the honking of horns for the ringing of bicycle bells and the chatter of pedestrians. The experiment will take place in Friedrichstraße – a street situated right in the middle of the city and known for daily, end-to-end traffic.

The two-hour event may be short and relatively small – only a narrow stretch from Kronenstraße to Taubenstraße will be restricted to traffic – but organizers hope it will inspire authorities to consider a permanent restriction.

“We want to show how beautiful [the Friedrichstraße area] can be if it is made available just to people,” organizer Heiko Bruns from the nonprofit autofrei leben! e.V. (Carfree Living), told The Local.

Earlier in 2018, German courts ruled that diesel cars may be banned in some heavy congested urban areas across Germany – including Friedrichstraße. The ban is currently on ice as the government tries to finalize a compromise plan which includes providing funding to reduce the cost of retrofitting diesel vehicles.

The event will give Christmas shoppers the chance to skip across the busy street unimpeded, but everyone who takes part will also have a chance to have their voices heard. A ‘speakers corner’ will be established on Mohrenstraße, where the organizers intend to discuss plans for the “city of tomorrow”.

“We will ask passers-by what they think about the idea of freeing large parts of the historic centre from traffic,” said Braun.

Children will be encouraged to draw their hopes for the future of the city on the sidewalk – in chalk – while adults will be able to do the same on the noticeboards placed throughout the car-free zone.

There will also be a chance for concerned residents to have their say, with several politicians from Die Linke, the Greens and the SPD in attendance.

The move isn’t the first time that the idea of pedestrians reclaiming the streets has been discussed. Traffic was stopped at the nearby Brandenburg Gate in 2002, while plans were announced in 2017 to restrict traffic on Unter Den Linden from 2019. Hamburg has also considered with making areas of the city car free in the not-too-distant future.

The Berliner Morgenpost reported in September that the Berlin Senate had recommended banning vehicle traffic around the Checkpoint Charlie section of Friedrichstraße – only a few hundred metres south – for safety reasons.

More than 26,000 foot crossings are made across the street in the Checkpoint Charlie area daily, with restrictions recommended to all traffic other than taxis, bicycles and night buses. Previous plans have included turning Friedrichstraße into a ’Sunday Shopping Street’ by closing it to vehicle traffic on Sundays.

Berlin’s red-red-green coalition stated in 2016 it had no plans to restrict the area to vehicle traffic although that stance appears to have changed in the wake of the above report.

The number of farm animals raised in Spain has jumped by more than a third since 2015 to around 560 million in 2020, it said in the report entitled “Mega farms, poison for rural Spain”.

This “excessive and uncontrolled expansion of industrial animal farming” has had a “serious impact on water pollution from nitrates”, it said.

Three-quarters of Spain’s water tables have seen pollution from nitrates increase between 2016 and 2019, the report said citing Spanish government figures.

Nearly 29 percent of the country’s water tables had more than the amount of nitrate considered safe for drinking, according to a survey carried out by Greenpeace across Spain between April and September.

The environmental group said the government was not doing enough.

It pointed out that the amount of land deemed an “area vulnerable to nitrates” has risen to 12 million hectares in 2021, or 24 percent of Spain’s land mass, from around eight million hectares a decade ago, yet industrial farming has continued to grow.

“It is paradoxical to declare more and more areas vulnerable to nitrates”, but at the same time allow a “disproportionate rise” in the number of livestock on farms, Greenpeace said.

Pollution from hundreds of intensive pig farms played a major role in the collapse of one of Europe’s largest saltwater lagoons, the Mar Menor in Spain’s southeast, according to a media investigation published earlier this week.

Scientists blamed decades of nitrate-laden runoffs for triggering vast blooms of algae that had depleted the water of the lagoon of oxygen, leaving fish suffocating underwater.

Two environmental groups submitted a formal complaint in early October to the European Union over Spain’s failure to protect the lagoon.