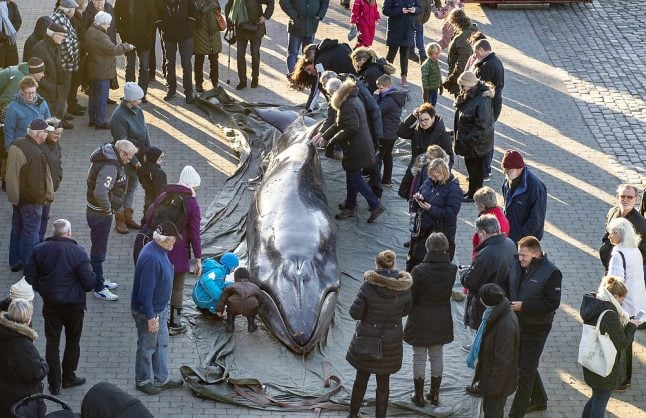 The whale was displayed at the harboiur on Tuesday before undergoing dissection. Photo: Henning Bagger/Ritzau Scanpix

No plastic was found in its stomach and no clear cause of death was identified, researcher Morten Tange Olsen of the Natural History Museum of Denmark told Ritzau.

“There was a veterinarian present who carried out a number of tests and took several samples which she will take home to analyse,” Olsen said.

“Initial conclusions are there was no cause of death,” he said.

The whale carcass will undergo a raft of tests by researchers from the University of Copenhagen, University of Southern Denmark and Aarhus University, Olsen added.

Researchers will study its larynx in an effort to understand how whales make sounds, he said.

Tests on the aquatic mammal’s heart will also be made. Scientists hope the tests can contribute to knowledge on human heart disease.

The heart may also shed some light on why the animal died.

“The cardiologist saw some things which, in humans, can be interpreted as heart conditions. But he needs to carry out more tests before he can confirm anything,” Olsen said.

An individual of the sei whale subspecies, the Hobro whale was initially estimated to be ten metres long, but measurement at the harbour on Tuesday found it to reach a shorter 7.7 metres.

“Its anatomy tells us something about how old it was. This could indicate it was a young animal.

“Without being able to say exactly, it was around two years old,” Olsen said.

The whale was first sighted in the Mariager Fjord waterway on November 27th, when passers-by helped free it from shallow waters. It died ten days later after apparently struggling to find a way back to the sea, with a plan to help guide it to freedom not coming to fruition.

Denmark is known for not being squeamish about publicly dissecting animals for educational purposes.

In 2015, Odense Zoo cut up a dead lion in front of crowds of schoolchildren, defying international criticism, before continuing what it said was regular practice by dissecting another lion and an antelope a few months later.